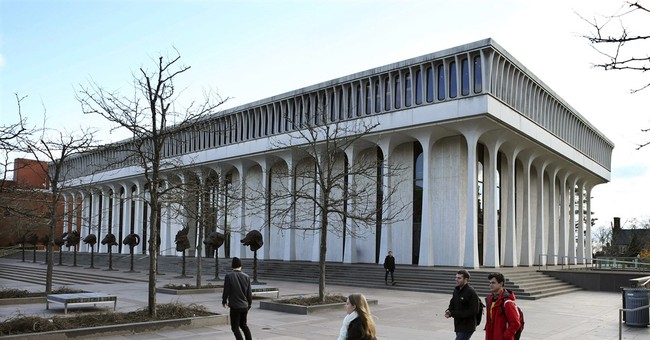 Princeton University President Christopher Eisgruber announced on Saturday that Princeton will be removing the name of the 28th President of the United States, Woodrow Wilson, from the university's school of public policy and residential college. Princeton's board of trustees approved the removal of Wilson's name on Friday, Axios reports.

"Wilson's racism was significant and consequential even by the standards of his own time. He segregated the federal civil service after it had been racially integrated for decades, thereby taking America backward in its pursuit of justice," said Eisgruber.

As POLITICO reports, Wilson segregated the federal workforce in D.C., held a private screening of "Birth of a Nation" -- a movie that glorifies the Klan -- and blocked a proposal to include racial equality among the founding principals of Wilson's failed League of Nations.

“The board reconsidered these conclusions this month as the tragic killings of George Floyd, Breonna Taylor, Ahmaud Arbery, and Rayshard Brooks drew renewed attention to the long and damaging history of racism in America,” Princeton University President Chris Eisgruber said about dropping Wilson's name.

In none of the shootings cited by Eisgruber has racism been established as the cause of death.

Woodrow Wilson was a progressive leader in the vein of Franklin Roosevelt. FDR nominated the ironically-named Klansman Hugo Black to the Supreme Court, refused Jewish refugees fleeing the Nazis, and threw Japanese Americans into internment camps. Sounds like he's going next.

Conservatives have also pointed out that Yale University is named after a slave trader.