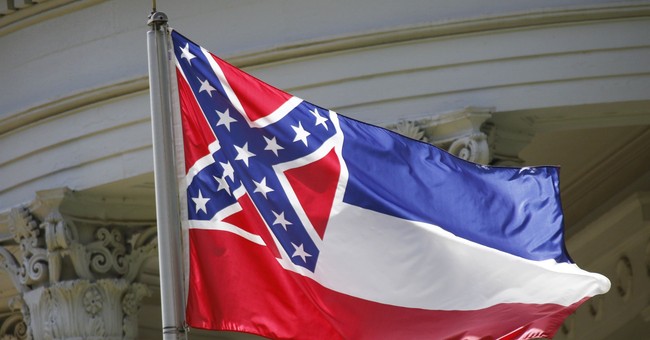 The Mississippi State House voted on Saturday to file a bill that would erase the state's flag. The Magnolia State's current flag features blue, white and red stripes with a canton of the confederate flag. Mississippi is the only state to have the confederate emblem on their flag.

The State House voted 85-34 to suspend the rules and allow lawmakers to consider a bill that would erase the current flag, CNN reported. A Senate committee will review the bill before it moves to the entire chamber.

The bill calls for a committee to design a new flag for the state. The new flag must bear the words "In God We Trust" and be approved by voters in the November election, the AP reported. Mississippi has used its current flag for over 125 years.

Mississippi Republican Governor Tate Reeves tweeted his support on Saturday, vowing to sign the bill if passed by the state legislature.

"It will be harder than recovering from tornadoes, harder than historic floods, harder than agency corruption, or prison riots or the coming hurricane season -- even harder than battling the coronavirus," the governor wrote.

"For economic prosperity and for a better future for my kids and yours, we must find a way to come together. To heal our wounds, to forgive, to resolve that the page has been turned, to trust each other. With God's help, we can."

The legislature has been deadlocked for days as it considers a new state flag. The argument over the 1894 flag has become as divisive as the flag itself and it’s time to end it.
If they send me a bill this weekend, I will sign it. pic.twitter.com/bf3vyzuObt