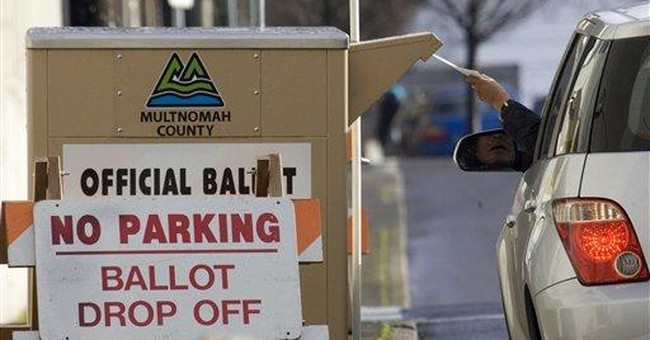 Experts have warned the coronavirus crisis might last into July or August, but Democratic senators are citing the current public health crisis to call for changes to the November election.

Today, Sen. @RonWyden and I — along with 24 cosponsors — introduced a bill to ensure every American can #VoteByMail. Because people shouldn't have to choose between casting a ballot and protecting their health.

Call your Senators and urge them to get it passed.

It's official: @SenAmyKlobuchar and I just introduced our bill to require #VoteByMail through November. Mitch McConnell should commit to including our proposal in the next #COVID19 package so states won't be forced to choose between holding elections and keeping people safe.

Looks like the senators spent time during the coronavirus crisis to coordinate their talking points. It'd be great if lawmakers could focus on the crisis at hand instead of exploiting a crisis to advance their political agenda. But this is what the left does. Sen. Wyden has been at this for a while; he introduced the Vote by Mail Act of 2010.

The idea of voters personally walking into a polling station and voting their own minds without some activist or union leader looking over their shoulders has always frightened the left. God forbid those voters might have to show some form of identification before picking our political leaders. It'd be much easier for the left to harvest ballots and engage in voter fraud if they could just do it all by mail. The same people so concerned about Russia meddling in our elections never want to secure the ballot box with anything more than the honor system.