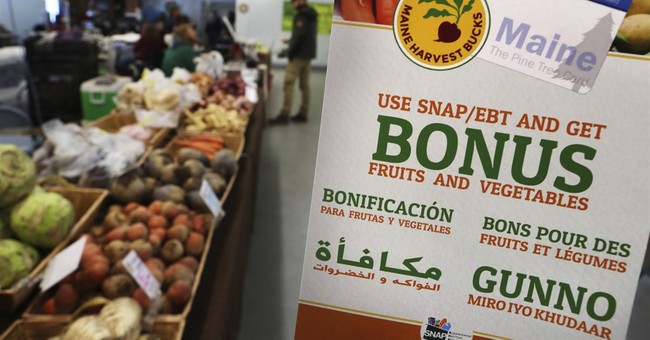 In non-impeachment news, the Trump administration approved a rule on Wednesday preventing states from waiving certain requirements for the federal food stamp program. The new rule will cut an estimated 755,000 individuals without dependents from the federal food stamp rolls and cut billions in federal spending.

President Bill Clinton signed welfare reform into law in 1996. Under the law, an able-bodied adult without dependents may, in general, collect Supplemental Nutrition Assistance Program (SNAP) benefits for no longer than 3 months within a 36-month period, unless certain work requirements are met. But states have previously been able to obtain waivers from the Department of Agriculture allowing states to extend the time limits such individuals collect benefits.

Prior to the new rule, counties with unemployment rates as low as 2.5 percent had been included in areas where federal requirements have been waived. The Department of Agriculture said in a statement that the new rule "promotes work for able-bodied adults between the ages of 18 and 49 without dependents and does not apply to children and their parents, those over 50 years old including the elderly, those with a disability, or pregnant women."

Department of Agriculture Secretary Sonny Perdue said “Americans are generous people who believe it is their responsibility to help their fellow citizens when they encounter a difficult stretch. Government can be a powerful force for good, but government dependency has never been the American dream. We need to encourage people by giving them a helping hand but not allowing it to become an indefinitely giving hand. Now, in the midst of the strongest economy in a generation, we need everyone who can work, to work. This rule lays the groundwork for the expectation that able-bodied Americans re-enter the workforce where there are currently more job openings than people to fill them.”

The regulatory impact analysis estimates that 755,000 individuals currently collecting SNAP benefits would no longer qualify under the new rule. As a result, the Department of Agriculture estimates a net reduction in federal spending of $1.1 billion in fiscal year 2020, saving $7.9 billion over the next five years.