Wow, Even Obama Thinks the Democratic Candidates Are Too Crazy 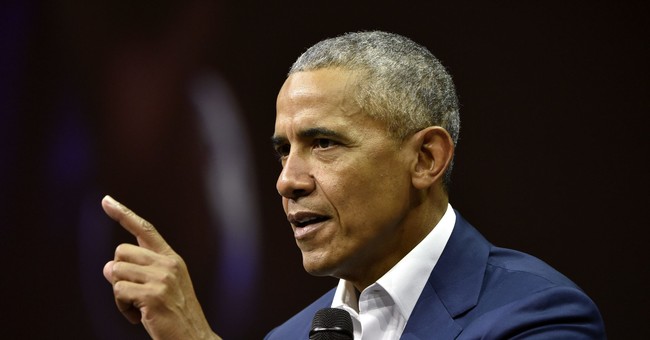 Speaking to a group of Democratic donors at a D.C. fundraiser on Friday evening, former President Barack Obama said the Democratic candidates are playing too much to the "activist wing" of the Democratic Party, warning donors that average Americans "just don't want to see crazy stuff."

But average Americans have seen a lot of crazy stuff in the primary race for the 2020 Democratic presidential nomination. The majority of candidates would decriminalize illegal border crossings, 10 candidates at a recent debate support the government providing healthcare to illegal aliens, and around half would pack the Supreme Court. Each candidate seems to have at least a few far-left policy proposals in their platform, including universal income, Medicare for All, reparations for slavery, giving felons in prison the right to vote, and ending the electoral college -- to name a few.

While Mr. Obama did not single out any specific primary candidate or policy proposal, he cautioned that the universe of voters that could support a Democratic candidate — Democrats, independents and moderate Republicans — are not driven by the same views reflected on “certain left-leaning Twitter feeds” or “the activist wing of our party.”

“Even as we push the envelope and we are bold in our vision we also have to be rooted in reality,” Mr. Obama said. “The average American doesn’t think we have to completely tear down the system and remake it.”

The comments marked an extraordinary entrance into the primary contest by the former president, who has been careful to avoid even the appearance of influencing the direction of the race.

Obama did not mention any specific names, probably because they are all crazy. But the current crop of Democratic candidates is forcing even Obama to defend the capitalist system from Democrats who propose tearing it down.

The conversation on Friday was moderated by Democrat Stacey Abrams, the failed Georgia gubernatorial candidate. Abrams is seen as a rising star in the Democratic Party and a potential VP pick in the 2020 race. Abrams lost her race in 2018 to Republican Brian Kemp, although Abrams still refuses to concede the race.

As Abrams participated in the conversation on Friday with former President Obama, the Georgia ethics commission filed a lawsuit against Abrams seeking communications between the Abrams campaign and third-party organizations. An ethics complaint was filed against Abrams in Aug. 2018 accusing the Abrams campaign of coordinating with the New Georgia Project, an organization founded by Abrams and dedicated to registering people of color to vote in Georgia. The New Georgia Project is accused of sharing personnel with the Abrams campaign and paying for expenditures to help the candidate in her failed bid for the governorship.