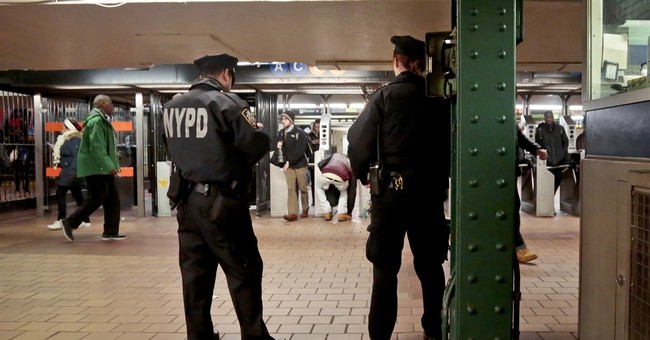 Around a thousand people participated in an anti-police protest in downtown Brooklyn on Friday night. According to the NY Post, the protesters blocked traffic, vandalized a city bus and hurled obscenities at police in response to the NYPD's planned crackdown of fare evasion and two recent incidents involving the New York Police Department (NYPD).

The previous Friday, police chased a suspect who jumped a turnstile and hopped onto a subway train. An NYPD officer was seen on video pointing a gun at the suspect while other passengers scurried to get out of the way. The NYPD has defended the officer's actions saying the officer believed the suspect may have been armed. Indeed, the suspect had a long rap sheet that included arrests for crimes like assault and robbery, according to the NYPD.

Another incident involving the police happened a few days later when officers attempted to break up a brawl that broke out on a subway platform. An officer can be seen on video punching a teenage boy who appears to have been fighting with officers. So whether the NYPD pulls a gun or throws a punch, they get criticized either way.

What this really is about is the crime theory of "Broken Windows," introduced by social scientists James Q. Wilson and George L. Kelling. Rudy Giuliani used the theory to completely turn around New York City's soaring crime rates. The theory holds that police can create an atmosphere of lawfulness and order by cracking down on minor but visible crimes, such as fare evasion. And it turns out you find a lot of guns, drugs and wanted criminals that way.

George Kelling explains why the left hates the theory so much:

Twenty-seven years ago, James Q. Wilson and I published “Broken Windows” in The Atlantic, proposing that untended disorder and minor offenses gave rise to serious crime and urban decay. We also hypothesized that government and community action to restore order might reduce crime. Not surprisingly, responses to the article were mixed. The Justice Department’s research arm, the National Institute of Justice, prepared to fund a major experiment to study the links between disorder and serious crime, but senior officials nixed it as too controversial. Police were sympathetic to the Broken Windows theory but also wary, since they felt overwhelmed by 911 calls already and didn’t relish the prospect of still more work. And the article got little attention in the academy.

But after New York City’s astonishing crime drop in the nineties—much of which Mayor Rudolph Giuliani and Police Commissioner William Bratton credited to the Broken Windows approach—a firestorm of academic criticism erupted, claiming that Broken Windows was racist, it harassed and criminalized the poor, it constituted cultural imperialism, it amounted to overzealous “zero tolerance,” and so on. ..."

Rep. Alexandria Ocasio-Cortez (D-NY) tweeted her support for the protest. "Arresting people who can't afford a $2.75 fare makes no one safer and destabilizes our community."

Ending mass incarceration means challenging a system that jails the poor to free the rich.

Arresting people who can’t afford a $2.75 fare makes no one safer and destabilizes our community.

New Yorkers know that, they’re not having it, and they’re standing up for each other. https://t.co/asvidIe5zV