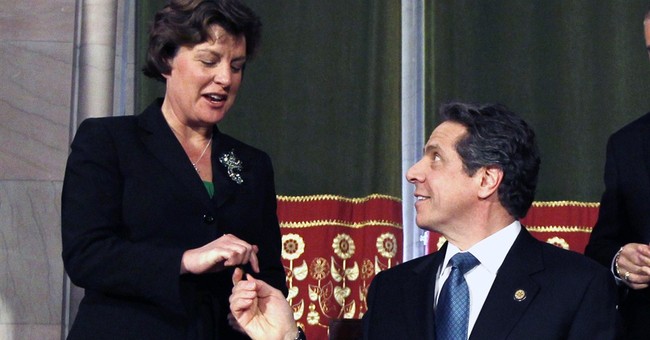 New York Governor Andrew Cuomo (D), who is running for re-election to a third term in office, has a lukewarm relationship with Democrats in his state. This is true to such an extent that former "Sex and the City" actress Cynthia Nixon has been waging a primary battle against the incumbent. But the November race for the Governor’s mansion had a new wrench thrown into it this morning, as ex-Syracuse mayor Stephanie Miner revealed to the New York Times this morningthat she will be making an independent bid for the office.

Miner, who finished her second term as mayor of Syracuse back in January, had previously turned down opportunities to run in New York’s 24thcongressional district against incumbent Rep. John Katko (R), but had left the door open for a gubernatorial run. Miner is also quoted long before today’s announcement as saying that Nixon’s decision to run would not affect whether or not she entered the race.

Miner denied that the run for governor was about personal ambition. She also brushed off the idea she could play spoiler in the November election and throw control of the state to a Republican. “The status quo needs to be spoiled and ended,” Miner said.

Miner plans to make her way onto the November ballot by taking advantage of New York election laws allowing candidates to gather signatures through petition to create her own political party. She plans to run under the banner of the Serve America Movement (SAM), a group started in 2016 by people sick of the existing two-party system in the United States.

Should Miner make her way onto the ballot, she may not be the only candidate on the left side of the aisle. Nixon, who is losing heavily in the polling for the Democratic primary, has already won a spot on the November ballot on the Working Families Party line. Even if Nixon takes a beating in the August primary, she can still continue her campaign if she chooses.

If Nixon continues past August, Cuomo, Miner, and Nixon could all end up splitting parts of the Democratic vote in a campaign against the expected Republican nominee Marc Molinaro. It is too early to tell what a four-way governor’s race could entail. There is no polling data on such a scenario and no Republican has won a statewide election in New York since George Pataki was elected to a third term as governor in 2002.