Facepalm: Sen. Toomey Calls for Legislation He Admits Is Already on the Books 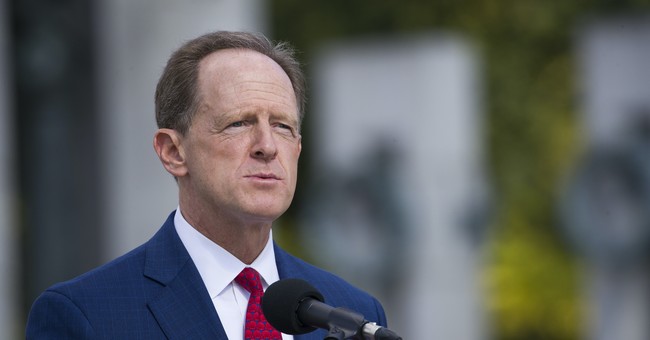 "Do you believe we have too many guns circulating in America?" NBC's Chuck Todd asked on "Meet the Press."

"I don't think the answer is too many guns, Chuck," Toomey said. "If I have four or five guns and I buy two more, did America become a more dangerous place? I don't think so. I'm not a dangerous person."

According to Toomey, it's important for legislators to "try and understand what drives the madness" and what motivates mass shooters.

"You know, whether a law-abiding citizen owns three or four guns, that has absolutely no impact on anyone's safety," he said.

TODAY on #MTP: @ChuckTodd asks @SenToomey: "Do you believe we have too many guns circulating in America?"

Toomey: "I don't think the answer is [that we have] too many guns. If I have 4 or 5 guns and I buy 2 more, did America become a more dangerous place? I don't think so." pic.twitter.com/vAhPDzlyQt

What's interesting is Toomey realizes the Senate lacks the 60 vote threshold needed to pass "universal background checks," which would require background checks for PPTs, something that is commonly done when a firearm is passed between family and friends.

Under current law, two private parties can transfer firearms to one another without going through a Federal Firearms Licensee (FFL) "provided the transferor does not know or have reasonable cause to believe the transferee is prohibited from receiving or possessing firearms under federal law." Some states, however, require citizens to obtain the transfer through an FFL.

The only way to create a "universal background check" is to create a firearms registry. It would mean the government would know exactly who owns what guns moving forward, something Second Amendment supporters believe could lead to firearm confiscation.

"Between the sales that already occur at licensed firearm dealers, all of which require a background check, and what we consider commercial sales – advertised sales and gun shows on the internet – that covers a vast majority of all transactions," he said. "And it would be progress to have background checks for those categories."

The only "category" that doesn't require a background check is for PPTs. They're already regulated. If a person knowingly sells or gives a firearm to someone they know or have reason to believe is a criminal, that is illegal. Either Toomey doesn't know the laws on the books or he's trying to skirt saying he wants to do away with PPTs.

I knew @SenToomey was an idiot when it came to guns but he LITERALLY just contradicted himself in this 37-second clip. Background checks are used for ALL commercial sales yet he wants them for all commercial sales. You're going after private party transfers and you know it. https://t.co/3t4AIhaQYr