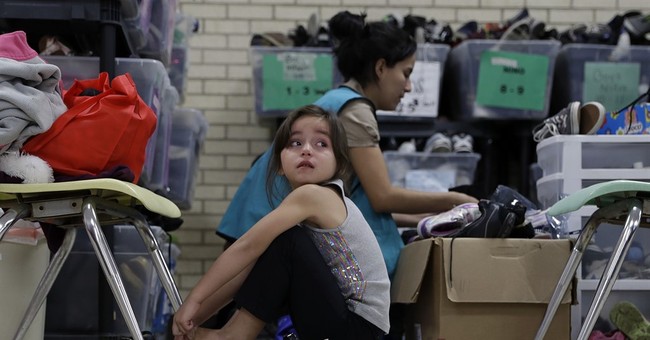 Democrats chided President Donald Trump over immigration policies that resulted in holding "kids in cages" and "separating families" at the United States-Mexico border, a claim that lacked nuance. It was something the left repeatedly hammered as inhumane and wrong. But now, just a little more than one month in office and President Joe Biden is continuing with a policy that was first established under President Barack Obama.

According to The Washington Post, the administration's "first migrant child facility" is officially open (emphasis mine).

The emergency facility — a vestige of the Trump administration that was open for only a month in summer 2019 — is being reactivated to hold up to 700 children ages 13 to 17.

Mark Weber — a spokesman for the Department of Health and Human Services, the agency that oversees services for migrant children — said the Biden administration is moving away from the “law-enforcement focused” approach of the Trump administration to one in which child welfare is more centric.

As of Sunday, there were about 7,000 children in HHS custody, over 90 percent capacity under pandemic-era requirements, Weber said. Carrizo is expected to close when the pandemic ends, he said.

Weber said the facilities received a bad rap under the Trump administration because many people associated them with the detention centers run by Immigration and Customs Enforcement. But the children always received good care and that never wavered between administrations, he said.

Weber said the influx shelters keep children from ending up in Border Patrol stations, which have holding cells that were not designed for children. During the 2019 immigration surge, many migrants were stuck in overcrowded cells for prolonged periods that exceeded legal limits.

It's important to note, as Weber said, this is a policy that was established under Barack Obama. The reason Border Patrol agents separate family units is so agents can determine whether or not the adults and children are actually related.

A former Border Patrol agent explained this process during an interview in early 2019:

While Border Patrol decides how to handle the family unit, they are separated from the general population. If a juvenile is present, agents monitor the family every 15 minutes to make sure they have food, water and any other necessities.

And the “fake families” we’ve heard of crossing the border isn’t a figment of our imagination. It’s happening.

Before the illegal aliens make their trek to America, a coyote will look through the group, identify a woman and her child and give them very clear instructions.

“The coyote tells them, ‘If we’re arrested, you’re my wife and you’re my child,’” Regalado said.

At the end of the day, the coyote is only worried about one thing: themselves and their business.

“Smugglers are in it for the money. It’s a business. That’s all it is for them. If they get caught and arrested, they go to prison, and that’s pretty bad for business,” Regalado explained. “If they can’t make money, it’s not a good business model. So, of course they’re going to do everything possible to not get arrested.”

Coyotes know that once they say a child is theirs an investigation must take place. Border Patrol agents have to find out if the child is really his, especially if it’s just a man claiming to have a child.

“If there is a mother and a child, it’s a little harder to recognize that they aren’t together. But there are clues and we do keep an eye on them closely. If they slip up and show they’re not really together, they will separate them and interview them,” he said.

Agents will ask basic questions if they suspect they are lying about being a family. Where is the child from? How old is the child? What’s the child’s middle name? When did you get married? What’s are your in-laws’ names?

If a person can’t answer those basic questions, it becomes obvious to agents the family is indeed fake.

Both Biden and Harris previously hammered the Trump administration for holding "kids in cages" and "separating families" but they failed to explain what Regalado did. Most of the "families" that come across the border aren't actually related. They're fake families coyotes establish.

These are just a few of Harris and Biden's previous takes on "kids in cages," which is what this "children migrant facility" really is.

One year ago, this Administration began ripping apart immigrant families. Putting children in cages. As I told @Astrid_NV and other brave activists today, we can fix our broken immigration system without tossing aside our values. pic.twitter.com/zYCz1PViOX

It is cruel and abhorrent to strip migrant children of the few protections they have. It's not enough this administration puts children in cages without soap and beds, now it wants to keep them there indefinitely. This isn't who we are. https://t.co/7HVcuvzEED

The trauma these children experience will live on for decades to come. It’s absurd that it needs to be repeated: ripping babies away from their parents to put them in cages is inhumane. pic.twitter.com/w76tiZUJmC

What the Biden administration is doing is nothing more than a continuation of the policies we saw in 2014. As I explained in a thread on Twitter, facilities in Texas were overcrowded. As a result, DHS bussed a number of illegal aliens to the Border Patrol station Murrieta, California. Residents successfully turned away buses and shined a spotlight on the humanitarian aspect of things.

Facilities like the one in Murrieta are further north, about two hours from the southern border. They're designed to be used as drug holding facilities, meaning they focus on catching drug mules and members of the cartel. The stations are holding facilities, meaning they only have a bathroom and a couple of metal benches. There are no beds, no showers, and no food facilities. Disease is a rampant problem, even in pre-COVID times. Throw the coronavirus into the mix and this is even more of a nightmare.