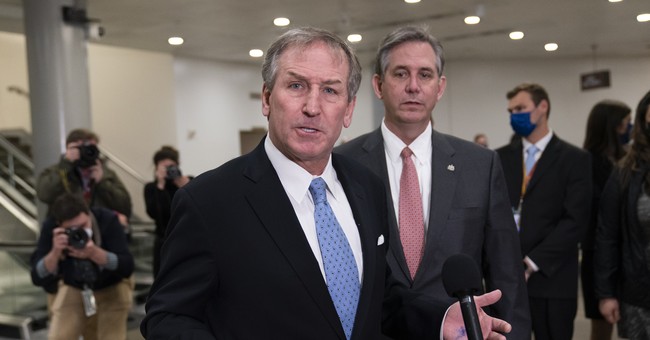 Attorney Michael van der Veen is feeling the impact of working to defend former President Donald Trump in the president's second impeachment trial. According to van der Veen, all aspects of his life are being attacked.

"The Senate sure reacted when you were in the roller coaster over witnesses. You were making the argument that you could have a hundred or more witnesses and at one moment the Senate laughed at you. They seemed to give you a hard time," the Fox News host said. "I want to ask you what your impressions were as a Philadelphia lawyer that came down here to argue this case. What was it like for you? What was your reaction to the way you were treated? And, as a follow up, how have you been treated as a result of defending the president. There were reports that your house was graffitied."

The attorney, clearly emotional, struggled to answer the question.

“My home was attacked. I’d rather not go into that," he explained. "To answer your question, my entire family, my business, my law firm are under siege right now. I don’t really want to go into that, though. What I’d really like to do is talk about the merits of the case.”

According to the Philadelphia Inquirier, van der Veen's home was spray-painted with the word "traitor" on the driveway. Windows were also smashed.

A group known as Refuse Fascism protested outside the attorney's law firm. They chanted, "When van der Veen lies, what do you do? Convict. Convict."

"She came home saw it in the driveway and called the police," Pezick told ABC News.

As of Saturday, no arrests have been made and there are no suspects. Police are continuing to patrol the area in order to "deter anything from happening." In addition, private security is now in place at the van der Veen's residence.

Another one of President Trump's defense attorneys, Bruce Castor, told Fox News his home has also been targeted.

"It’s been very unsettling. Mr. van der Veen’s house was vandalized last night," Castor said. "My house was the subject of unrest. These people are lawyers and they expect to do their jobs without having fear for their personal safety."

This is the latest in a string of vandalism targeting political figures. In January, then-Senate Majority Leader Mitch McConnell's (R-KY) home was targeted. The attackers were angry about the latest coronavirus relief bill and wanting to see a stimulus check.