Iran Is Planning Its Revenge for the Death of Soleimani 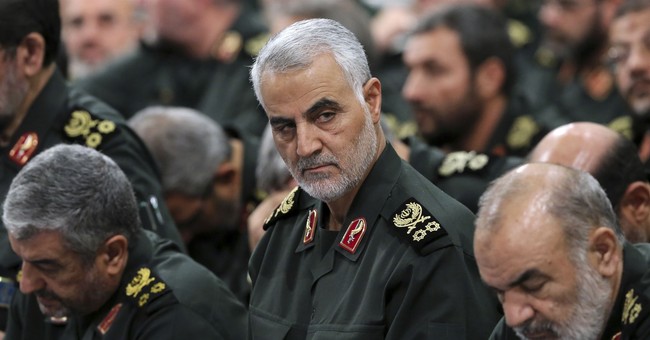 Iran's Chief Justice, Ebrahim Raisi, on Friday warned that those involved in the death of Gen. Qassem Soleimani, including President Donald Trump, will "not be safe on Earth." The Islamic Republic is planning their revenge on the United States to coincide with the one year anniversary of Soleimani's death, which took place on Jan. 3, 2020.

According to Raisi, President Trump, who ordered the drone strike on Soleimani, and those who carried out the attack are not "immune from justice," The Times of Israel reported.

“They will witness severe revenge. What has come so far has only been glimpses," Raisi said during an event on Friday to honor Soleimani at Tehran University.

“Do not presume that someone, as the president of America, who appeared as a murderer or ordered a murder, may be immune from justice being carried out. Never,” he said. “Those who had a role in this assassination and crime will not be safe on Earth.”

The Iran Foreign Ministry also took to Twitter to slam the United States' decision to have the top Iranian general killed.

"By committing a craven act of terror against Gen Soleimani, the US violated int'l law & the UN Charter in a blatant violation of Iraqi sovereignty," the tweet stated. "The US' lawlessness in full show. #Iran won't rest until bringing those responsible to justice."

According to the Iran Foreign Ministry, President Trump and the United States "violated international law and the UN Charter" when the strike on Soleimani was ordered and carried out.

By committing a craven act of terror against Gen Soleimani, the US violated int'l law & the UN Charter in a blatant violation of Iraqi sovereignty.

The US' lawlessness in full show.#Iran won't rest until bringing those responsible to justice.#WillNeverForgetWillNeverForgive pic.twitter.com/nUscWM2CDo

A few days before Christmas, President Trump warned the Iranians not to attack the United States. The warning came after Iran launched several rockets at the U.S. embassy on Dec. 20.

Our embassy in Baghdad got hit Sunday by several rockets. Three rockets failed to launch. Guess where they were from: IRAN. Now we hear chatter of additional attacks against Americans in Iraq... pic.twitter.com/0OCL6IFp5M

...Some friendly health advice to Iran: If one American is killed, I will hold Iran responsible. Think it over.

Two B-52 bombers were spotted in the Persian Gulf earlier this week on a "nonstop, 30-plus-hour mission," Fox News reported. The goal was to send a warning to Iranian officials that an attack on the United States in retaliation for Soleimani's death would not be tolerated.

"The United States continues to deploy combat-ready capabilities into the U.S. Central Command area of responsibility to deter any potential adversary, and make clear that we are ready and able to respond to any aggression directed at Americans or our interests," Gen. Frank McKenzie, commander of U.S. Central Command, said about the training missions. "We do not seek conflict, but no one should underestimate our ability to defend our forces or to act decisively in response to any attack."

Soleimani was the head of the Quds Force, an elite group of the Islamic Revolutionary Guard Corps. The Quds Force was deemed a terrorist organization back in 2007.

President Trump gave the order to kill Soleimani a few days following a Hezbollah mob's attacks on the United States' embassy in Baghdad a little more than one year ago today.

President Trump's response to the attacks on the U.S. embassy in Baghdad last year is a stark contrast to President Obama's lack of response when a similar situation took place in Benghazi back in 2012.