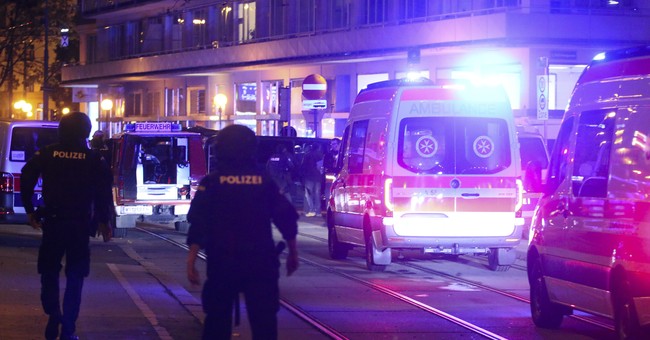 Just hours before Austria went on a nationwide lockdown to help prevent the further spread of the Wuhan coronavirus, multiple gunmen opened fire in six different locations throughout Vienna. According to the BBC, 15 people are wounded, including one police officer. Seven of the wounded have serious injuries. Police shot one gunman, who succumbed to his injuries, CNN reported. Another gunman remains at large.

The locations were surrounding Vienna's main synagogue, the Seitenstettengasse Temple, although it's unclear if that was the intended target.

Out of an abundance of caution, Jewish institutions in Vienna will be closed on Tuesday, Oskar Deutsch, President of the Jewish Religious Community, said in a Twitter thread.

"Whether the city temple was also the target of the attack can currently neither be confirmed nor ruled out. The synagogue was already closed because the evening prayer had ended. An assassin shot at passers-by in front of the house. The police have a large number secured the city center with special forces. As before, the situation has not been fully clarified," Deutsch tweeted in German. "The IKG is in close contact with the police. On the basis of the current risk assessment, we are all called upon to remain at home or in a lockable building stay. All synagogues, Jewish schools and the institutions of the IKG, kosher restaurants and supermarkets will remain closed tomorrow as a precaution. Please follow the instructions of the police!"

Police have tightened security. The Czech Republic is conducting random searches along teh board with Austria. Their concern is the gunmen may have fled in that direction.

This is a developing story and will be updated as new information comes in.