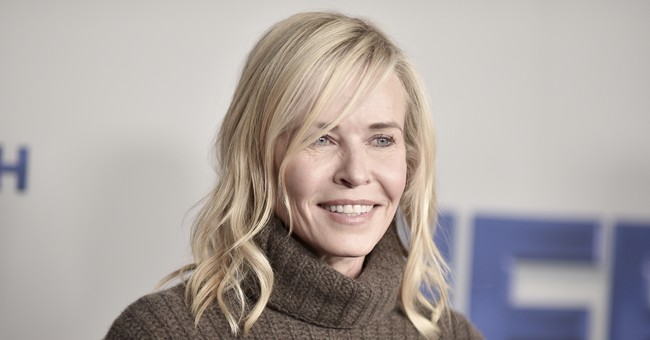 During an interview with Jimmy Fallon on Friday, comedian Chelsea Handler slammed 50 Cent, her ex-boyfriend, for deciding to support President Donald Trump. Handler took particular issue with his support for the president because he's African American.

"You heard my ex-boyfriend, right, 50 Cent, his support of Donald Trump?" Handler asked.

"Yeah, what's going on with – I saw your tweets and I said, 'What's happening?' Because you said he was your favorite ex-boyfriend and then what does he do? Supporting Trump?" Fallon asked.

Instead of having an intelligent, adult like conversation, Handler said she would be "willing to seal the deal in other ways" if 50 Cent changed his support to Biden and "publicly denounces Trump. I might be willing to go for another spin, if you know what I'm talking about."

On Friday’s #FallonTonight, @50cent’s ex-girlfriend, @ChelseaHandler, scolded him: “I had to remind him that he was a black person, so he can’t vote for Donald Trump.” If he denounces Trump, “I might be willing to go for another spin, if you know what I’m talking about” pic.twitter.com/bILbTsK7R0

She feels so strongly about 50 Cent needing to be on Team Biden that she even offered to pay his taxes.

Hey fucker! I will pay your taxes in exchange for you coming to your senses. Happily! Black lives matter. That’s you, fucker! Remember? https://t.co/uQsu7DHrRQ

Handler is a prime example of the type of people former Vice President Joe Biden and the Democrats court. She automatically makes the assumption that 50 Cent should support the Democrats because he's black. In a lot of ways, she parroted Biden's "you ain't black" comments, which is disgraceful.

50 Cent actually looking at things from a policy perspective and making up his mind – that's what all Americans should do – and now he's being scolded.

Taxes aside, President Trump has made great strides for the black community. Pre-COVID unemployment was at record lows for African Americans. Trump expanded opportunity zones, where businesses have tax incentives to build and operate in "economically-distressed communities." He provided more funding – at a record level – to Historically Black Colleges and Universities.