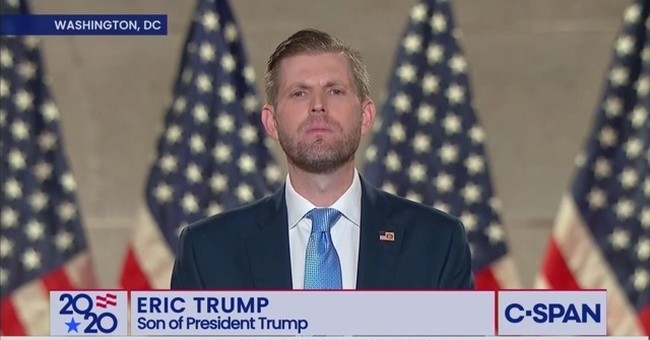 "They believe the only path forward is to erase history and forget the past. They want to destroy the monuments of our forefathers.They want to disrespect our flag – burn the stars and stripes that represent patriotism and the American dream," he explained. "They want to disrespect our National Anthem by taking a knee, while our armed forces lay down their lives every day to protect our freedom. They do not want the Pledge of Allegiance in our Schools. Many, do not want 'one nation under God.'"

According to the younger Trump, the president ran to stand up for the American people who often feel forgotten, especially those in "flyover" states.

"The media mocked these patriots – and 'the flyover states' in which they lived. They ignored the Trump flags. They ignored the millions of MAGA banners and barns painted in red, white and blue," he recalled. "The Silent Majority had no one fighting for them in either party. Their so called leaders were bowing to China, bribing Iran, and spending more time worrying about how they were received by the elites in Paris than how Americans would provide for their families in Pittsburgh."

It was under President Trump's leadership that the "Great American Comeback" took place, Eric said. The largest tax cuts in American history, record-low unemployment for blacks and Hispanics and expanding the Military.

"The moment President Trump ordered special forces to kill some of the deadliest terrorists on the planet – the day the mighty MOAB was dropped on insurgent camps – is the day America took a stance to never be defeated by the enemy," he said.

The younger Trump reminded the audience that former Vice President Joe Biden has been in politics for more than 40 years and has accomplished nothing.

"Joe Biden is a politician who has been in government for 47 years. He is a career politician who has never signed the front of a check and does not know the slightest thing about the American worker or the American business, the engine which fuels the greatest economy the world has ever known," Eric explained. "The same politician who is a total pushover for Communist China and someone who would be a giant relief for the terrorists who’ve now spent years running, hiding, and being taken out by the most talented military known to man."

According to Trump, "82 percent of all Americans" would see a tax increase if Biden is elected and illegal immigrants would receive amnesty and health care.

But it's the American spirit that the president fights for, his son said.

"Every day my father fights for the American people. The forgotten men and women of this country. The ones who embody the American Spirit, which is unlike anything else in the world. ... The American Spirit can be felt in the majesty of the Grand Canyon, the shadow of Mt. Rushmore and in the stillness of the air at Gettysburg," he said. "It can be seen in the wide-eyed wonder of every American child as they take their first breath in the greatest Country the world has ever known."

"It defeated fascism and communism and in 68 days, it’ll defeat the empty, oppressive, and radical views of the extreme left," Eric said.