One Democrat's Hypocrisy Soars to New Heights... All Over National Parks 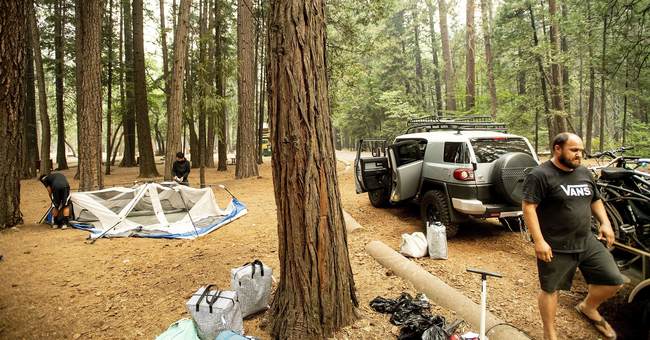 Since the start of the Wuhan coronavirus pandemic, Democrats have wanted the National Park Service to shut down parks or slowly open facilities across the nation. Despite his party's push to limit how Americans spend their time, particularly outdoors, Congressman TJ Cox (D-CA) pulled strings to get into Yosemite National Park on the 4th of July.

Cox, whose district falls close to Yosemite, had his staff request two parking passes for a personal visit to the park. At the time, people could request one of 340 tickets available. Tickets were given on a lottery basis.

Emails obtained by the Washington Examiner show National Park Service staff made it clear that they do not provide preferential treatment for members of Congress. The only time members of Congress are allowed to obtain tickets outside of the public allotment are if they are visiting in an official business capacity, not as someone trying to visit the park.

“Due to the personal nature of this visit, we are unable to honor your request,” Teresa Austin, Deputy Superintendent of Yosemite, told Cox's staff.

When Cox's staff asked for a reason, Austin had to get higher-ups involved.

According to Matthew Bigelow, the Associate Ethics Counsel for the National Park Service, the agency has a very clear policy on these types of scenarios.

Because Cox was wanting to visit on a national holiday and not in a business capacity, it was clear to Bigelow this was a personal trip.

After Austin's call with Cox, the trip was changed from "personal" to "business."

The preferential treatment has Rep. Paul Gosar (R-AZ), the head of the House Western Caucus, wanting the Department of the Interior to investigate.

"Use of one’s status as a Member of Congress in an attempt to influence an Executive Branch employee to acquire preferential treatment for personal gain is a breach of that public trust," Gosar wrote in his letter to the Interior Department on Aug. 3.

Cox used his position to pressure the NPS to give him access to the park despite this being a personal trip on a holiday.

Cox did, however, share a video from Yosemite back in June about the passage of the Great American Outdoors Act.

As Americans, we believe in preserving our lands for future generations. I'm proud to have introduced the bipartisan Great American Outdoors Act in the House. Our bill will help protect our natural resources, public lands, and fund LWCF permanently.

Talk about rules for thee but not for me.