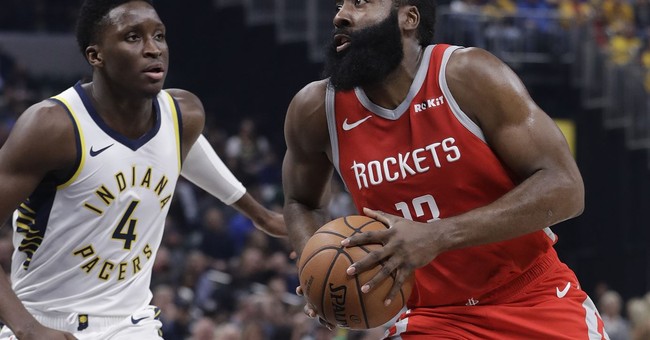 James Harden, a National Basketball Association player for the Houston Rockets, has come under fire for wearing a "Thin Blue Line" neck gaiter, a symbol used to show appreciation for law enforcement professionals. The photos were taken as Harden arrived in Orlando for practice at the Walt Disney World campus. He arrived four days after the rest of his teammates.

The Beard has arrived! ?? pic.twitter.com/WrTZMclEDh

Harden told ESPN he wore the face mask because it covered his beard and he wasn't trying to make any kind of a political statement.

Here is James Harden's full answer on the mask he wore on Thursday. #Rockets

Harden was asked about the mask, social justice message on the back of his uniform, and if he was aware what the mask represented. https://t.co/oWsF82WxeF pic.twitter.com/XT3MBn0igM

"Honestly, I wasn't trying to make a political statement," Harden said before the Rockets' practice Friday. "I honestly wore it just because it covered my whole face and my beard. It's pretty simple."

Harden said he is looking at ways to support the Black Lives Matter movement. One possibility he's looking at is having a message on the back of his jersey.

When the basketball player began facing backlash, rapper Young Thug went to bat for his friend.

Just so u know James harden is my brada... btw he don’t have internet so he obviously don’t know what’s right or wrong if he posted something that’s against US...but I hate when rappers get in niggas biz like it’s can’t happen to em?? buster let niggas clear they shit up activist

It's really sad that this guy is being chided for wearing a mask because it shows support for law enforcement professionals. Even if he didn't know what the symbol meant  (which I don't believe) and decided to wear it, he shouldn't be trashed because of it. Like he said in his interview, there are bad apples in every profession. That doesn't mean every single person in that professional should be written off. Police officers are no exception.