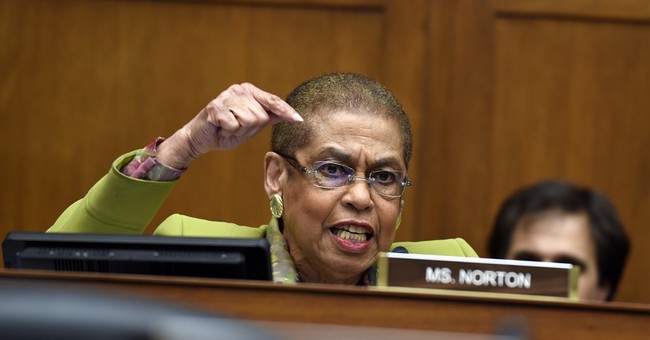 Protestors in Washington, D.C. set up the "Black House Autonomous Zone" – or BHAZ for short – on Tuesday. Things became rather heated between Black Lives Matter protestors, with some launching F-bombs at one another.

Good. God... This is what is going on near the White House. You can’t make this shit up: pic.twitter.com/B3QiEIM8pr

But one of the highlights, as captured by The Daily Caller, was when a protestor ran and attempted to attack Rep. Eleanor Holmes Norton (D-DC) and NBC reporter Andrea Mitchell. Norton can be heard asking, "Where is the police when you need them?"

“Where’s the police when you need them?”

When people are scared, in a crisis or they need help, who do they call? 911. Who do they expect to respond? Law enforcement and fellow first responders, like EMTs, the fire department and paramedics.

We continually hear we need to "defund the police" or "abolish the police," yet no one thinks about the long-term implications of that. What happens when a woman is being beaten by her husband and has nowhere to turn? Who does an elderly man call when someone attempts to break into his house? Who solves a murder or tracks down a woman's rapist?

This notion of doing away with law enforcement in its entirety is nonsense. We live in a society that is based on law and order. There are criminals who – shockingly – break the law because that is the very definition of a criminal. Police officers exist to make sure laws are maintained and those who are the victim of a crime have someone on their side.

We hear that health care professionals and social workers are equipped to handle these situations better than officers are. What makes people believe that A) they want to face grave danger in a split second; B) face criminals head-on; and C) do their normal jobs plus all of the work law enforcement officers do?

In this instance, Rep. Eleanor Holmes Norton is the epitome of every American who wants to feel safe and protected. Our men and women in blue do that. Before we talk about getting rid of them in their entirety, maybe we need to have an honest conversation about how much we rely on them.