Sen. Tim Scott: These Are the Three Police Reforms We Need 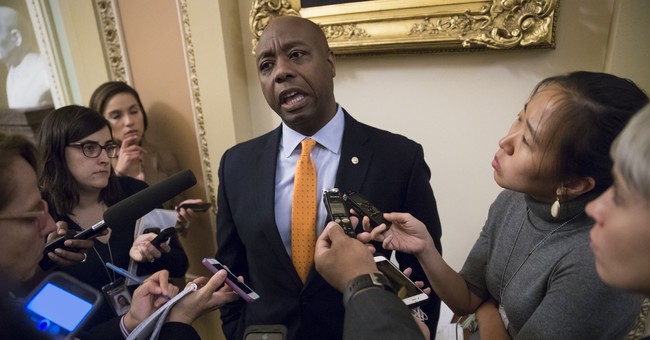 South Carolina Sen. Tim Scott (R) has been at the forefront of calling for and leading police reforms that both political parties can agree upon. Scott told "Face the Nation" host Margaret Brennan there are three areas of police reform he would like to see, and it's something he believes could be agreed upon in a bipartisan fashion.

"A second thing we have to do is look at training and tactics. If we do that, we can certainly deescalate the situation and make sure that the officer and the suspect go home," he explained. "And the third part of it is officer misconduct. If we can drill into officer misconduct, we do it on the local level, House has been talking about doing it on the state level, the president's executive order talks about doing it on a national level."

NEWS: On law enforcement agency reporting, @SenatorTimScott tells @margbrennan “we need a hundred percent as it relates to serious bodily injury and death,” and says his Senate measure would address the issue

What else should be in the bill? Watch ? pic.twitter.com/tL2JNLN6ET

Brennan also asked Scott his thoughts on ending "qualified immunity," which would make it easier to fire a police officer. It's something Democrats have called for.

"Well, there are two ways that you can deal with that. From the Republican perspective – and the president sent the signal that qualified immunity is off the table. They see that as a poison pill on our side – we could use a decertification of [the] officer, except the law enforcement unions say that's a poison pill," he explained. "We're going to have to find a path that helps us reduce misconduct within the officers but, at the same time we know any poison pill in legislation means we get nothing done. That sends a wrong signal, perhaps the worst signal, right now in America. I think we're going to have legislation that can be negotiated that gets us to the place where something becomes law that actually makes a difference. That's got to be the goal."

.@SenatorTimScott tells @margbrennan ending qualified immunity -- which shields police from being held liable for constitutional violations -- is a "poison pill" opposed by police unions -- in any police reform bills Congress might consider pic.twitter.com/v7XeqGu95x

The clip that was posted on Twitter was cut short. "Face the Nation" tweeted a full transcript of Scott's comments, including the last couple lines about potential bipartisanship.