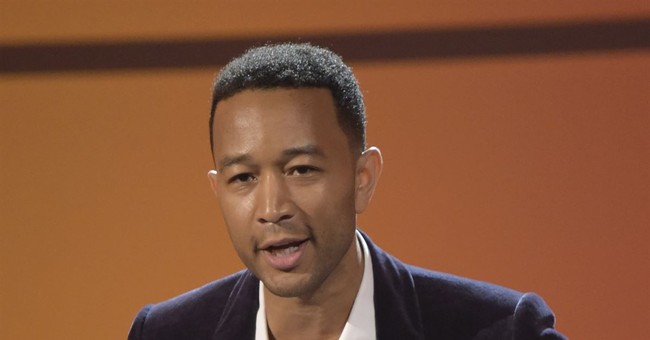 The new talking point coming from George Floyd protestors is that they want to see cities "defund the police." In fact, Denver Public Schools is set to vote on removing all Denver Police Department officers from its campuses, a move officials say will end the "school to prison pipeline."

Conservatives have questioned the movement. After all, "defund the police" implies abolishing law enforcement agencies all together.

John Legend took to Twitter to say that the call is to pull some funding from police departments and reallocate the funds to other necessary resources, like "social work, health care, conflict resolution, [and] drug treatment."

Legend played on Nancy Pelosi's "show me your budget, show me your values line," saying that local budgets are "moral documents" that point to what an area's priorities are.

He said the word "defund" is used because it pulls funding away from police and reallocates it.

Legend also used the opportunity to slam Democrats for assuming grassroots movements should work at crafting messages that align with the party's vision.

Call it what you will, but this is a step in the wrong direction. Los Angeles Police Department is a prime example. There are 9,000 police officers for a city that has almost four million people. That is one police officer for every 433 residents. Taking away funding and officers expands that ratio, making law enforcement officers even more unreliable for the law-abiding.

Not only that but these activists make an assumption. If funding is cut from local police departments, who is to say that the actual officer positions will be cut? Isn't it more likely that administrative positions will be cut first? Even if activists are successful in getting actual officers off the street, how many are we talking? One percent? Five percent? No one approach can be taken to every single community. Some areas are more stretched than people realize. And what about sheriff's departments that service a massive area of smaller communities that don't have their own police departments?

There are so many logistics people clearly haven't thought through. Instead of working to get rid of cops or lower the number of them that are on the streets, we should look at bolstering some of the other programs that could make an actual difference in people's lives, like drug treatment programs and facilities and school counselors. It doesn't have to be one or the other.

Latest: Trump Announces a Shake Up to His Campaign

Beth Baumann
Popcorn: How an Anti-Trump Group Got Hit With a Boomerang Over a Self-Righteous Tweet
Matt Vespa
CARTOONS | Steve Breen
View Cartoon
Most Popular