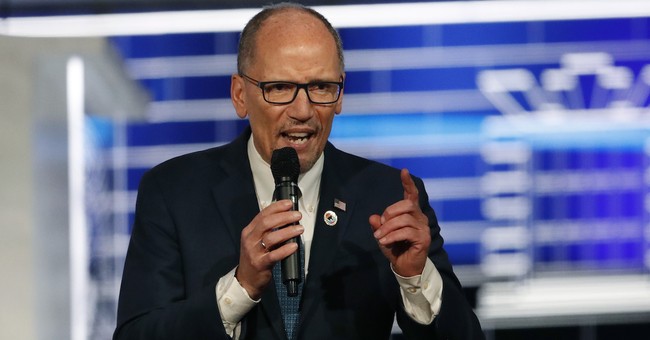 The comment came when ABC's Martha Raddatz pressed Perez on Tara Reade's sexual assault allegations. The University of Delaware has said they would not release any of the documents Biden donated because they don't contain personnel matters.

"[The University of Delaware] kind of brushed aside suggestions that a search be done of just Tara Reade's name in those documents. The New York Times editorial board called for the DNC to convene an unbiased, apolitical panel to review portions of Biden's papers, saying 'his word is insufficient to dispel the cloud," Raddatz said. "Your communications director has called that idea 'absurd.' Why?"

According to Perez, Biden has undergone "so many investigations."

"The most comprehensive investigation of the vice president was when he was vetted by Barack Obama in 2008. I'm very familiar with the vice presidential vetting process," Perez said smugly. "They look at everything about you. They looked at the entire history of Joe Biden, his entire career. And I'll tell you, if Barack Obama had any indication that there was an issue, Barack Obama would not have had him as his vice president."

"Barack Obama trusted Joe Biden. I trust Joe Biden and those investigations have been done," the DNC head said.

Perez made the case that universities that take congressional records take policy documents and copies of speeches, not personnel records.

"But why not just search 'Tara Reade' in those documents?" the ABC host asked.

"This is like the Hilly emails because there was nothing there and the reason is if I'm going – I worked on the Senate Judiciary Committee in 1995. The ranking member was Joe Biden," Perez explained. "I wasn't working for Joe Biden. I was working for Sen. Joe Kennedy. If you want to see my personnel records, you don't go to the Kennedy Institute. That's not where they go. And so when you ask the University of Delaware to take a look at something, you're asking them to look for something that doesn't exist."

As Raddatz pointed out, there's no harm in the university doing a simple search of the name "Tara Reade" in the documents. If nothing turns up, then we're back at square one. If something does show up, then that's a whole other story. And one the Democrats are afraid of becoming a reality.

It's quite ridiculous that Perez is going to try to compare Tara Reade's sexual assault allegations to Hillary Clinton's email scandal. Democrats say "nothing was there" because they're in denial. It was proven that Hillary was careless with classified information. She stored that info on her private server and used a personal email account.

Wanting to get to the bottom of a sexual assault allegation made against a man seeking the highest office in the nation is hardly the same as investigating the handling of classified information. The only thing these two cases have in common is Democrats in denial.