Guess How Much Steyer Thinks Minimum Wage Should Be. Hint: It's Not $15 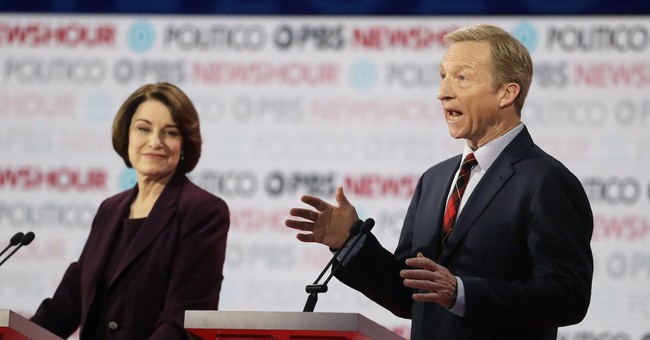 Democrats repeat the same talking point over and over, that the minimum wage should be $15 across the country, regardless of the job or skill set required to carry out their work. Billionaire Tom Steyer, however, is taking things a step further and pledging to implement a $22 an hour minimum wage should he become president, the Associated Press reported.

Steyer made the comment during a block party in Winnsboro, South Carolina, an area that has one of the highest unemployment rates in the state and has struggled in recent years.

The climate change advocate's pledge is seen as more progressive than his counterparts, Sens. Bernie Sanders (I-VT) and Elizabeth Warren (D-MA) who have called for the minimum wage to be increased to $15 an hour, something that is commonly accepted amongst the Democratic Party and their supporters.

According to Fox Business, increasing the minimum wage to $15 an hour could have detrimental impacts on the workforce. Going higher could have even dire consequences:

The federal minimum wage rate has remained at $7.25 per hour for the past decade, though 29 states and Washington have set it higher. (At the beginning of January, more than 20 states raised base pay even higher). The annual earnings for a full-time minimum-wage worker are $15,080, which is slightly above the federal poverty line for one person.

According to a Congressional Budget Office report published in July 2019, increasing the federal minimum wage to $15 per hour could result in 1.3 million workers losing their jobs. (The report estimated there’s about a two-thirds chance that somewhere between zero and 3.7 million workers would lose their jobs).

The ones who would suffer the most under Steyer's plan would be small business owners who have slimmer profit margins and must compete with bigger national brands and chains. The CBO report noted income reduction for business owners "because increases in the prices of goods and services weaken families’ purchasing power. Over time, as businesses increasingly pass their higher costs on to consumers, the losses in business income diminish and the losses in families’ real income grow.”