Jill Biden Is In Total Denial Over Her Husband's Political 'Baggage' 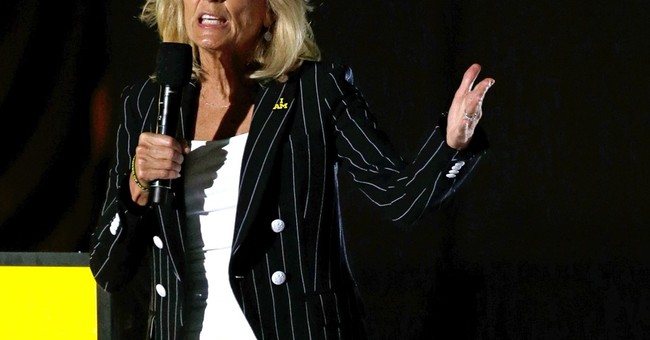 Former Second Lady Jill Biden is hitting back at Sen. Bernie Sanders (I-VT) after he made the comment that former Vice President Joe Biden has too much political "baggage" that makes it hard to excite voters.

According to Jill, Sanders' comments are "ridiculous."

But the biggest issue she has? Democrats attacking fellow Democrats, including her husband.

"Joe has been under attack because he's doing so well. And I don't like it that Democrats attack other Democrats. We're in this race against Donald Trump. We're not against any of the other Democrats," the former second lady told CNN. "As I travel around the country people are saying to me, 'Jill, we don't like it, that the Democrats are attacking one another,' and I agree with that."

Joe Biden has been under attack from both Democrats and Republicans alike, but for different reasons. Democrats are upset that Biden is so moderate. While many see this as a negative, Jill sees it as a positive and an opportunity to garner support from independents.

"Democrats can't win without Independent support A lot of people say, 'You know, I voted for Trump last time, but I'm sorry I did it.' And they said, 'I want to vote for someone who is pragmatic, who's a moderate, who's reasonable, who can achieve things.' And, and that's my husband," she explained. "So, I think people want someone [who's] a moderate, who can appeal to Democrats, Independents and Republicans."

Republicans, on the other hand, are disgusted by the nepotism that took place, especially in Ukraine. While Biden was vice president, he handled international relations with Ukraine on behalf of the Obama administration. At the same time, his son, Hunter, was being paid $50,000 to $83,000 per month to sit on the board of Burisma, a corrupt Ukrainian gas company, despite having no natural energy experience.

Part of the Bidens' campaign strategy is to conquer and divide. Joe goes one way and Jill goes another way to cover more ground and to talk to more people. She's risen as one of the former vice president's strongest surrogates on the campaign trail. But it's a role that she's had over the last 42 years of their marriage.

"Joe and I've been married for 42 years. This is how we've always done things. I've campaigned in every election. I go one way, he goes the other way, and so we can cover more ground and talk to more people," she explained "He's always supported my career. And this is a critical time for me to support him because, you know, I want change.  I want a new president."

The former second lady said her family was prepared to take on President Donald Trump but their longtime experience in politics has allowed to "buil[d] up a resilience" to whatever is launched at her.

"We knew Donald Trump was going to be a difficult opponent, that he was never going to play fair. And so I think we were ready for whatever was going to come our way," she said. "I've been in this business for 42 years, so I think I have built up a resilience to whatever comes my way...I think it's important to be positive about it and move forward in a positive direction."

The Bidens are having a rough time for a number of reasons. For one, Joe has been in politics for more than 40 years. He's the definition of a career politician and that's something that people absolutely hate. He's also a moderate, which upsets the Democratic Party's base. And then there's the Ukraine scandal. The American people can only endure so much of a politician before they want change. And Joe Biden embodies the status quo.