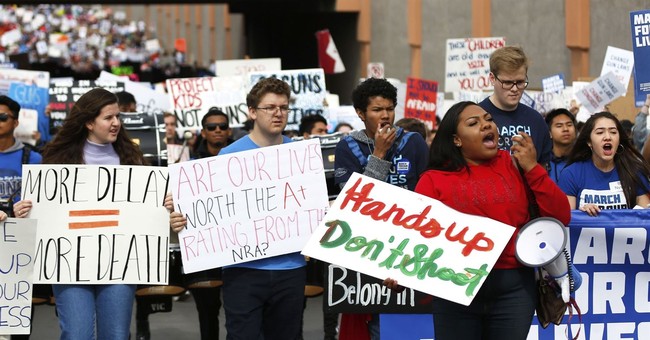 Ever since the tragic school shooting at Marjory Stoneman Douglas High School in Parkland, Florida on February 14, 2018, students across the nation have become more vocal and outspoken about their political beliefs and because of that, one of the largest school districts in the nation is responding.

Beginning in January, students in Fairfax County, Virginia can take one school day off per year to engage in political activism, NPR reported. The Fairfax School Board will give students in grades 7 through 12 one excused absence per school year for a "civic engagement activity." How students choose to spend that day is up to them, as long as it's through an activity that "makes their voices heard." That can range from lobbying members of Congress in Washington, D.C. to attending rallies in Richmond.

To get the excused absence, students submit a form in advance, check in at school on the day they plan to miss and then head off to their activity.

"We saw students wanting to take time out of the school day to lead protests and do things of that nature. We and other school systems around the nation kind of scrambled to figure out how to handle those protests," Fairfax School Board Member Ryan McElveen, the one who proposed the idea, told NPR. "Public education in the United States was founded on the belief that we need to raise our young people to be productive citizens and give back to society. This is just one way that they can learn the skills that they will need to use later in life, whether it's lobbying a legislator, or making their voice heard through a protest."

The idea is so new that when McElveen did research about how other school districts are handling the situation and what policies they have implemented, he was unable to find anything.

“I think we’re setting the stage for the rest of the nation with this,” he told The Washington Post. “It’s a dawning of a new day in student activism, and school systems everywhere are going to have to be responsive to it.”

Conservatives, understandably, have taken issue with the policy implementation. All of the recent protests and walkouts that target middle and high school kids have been orchestrated by the left. First it was the March for Our Lives movement, the group started by Marjory Stoneman Douglas students that calls for stricter gun control laws. Now that movement has been overshadowed by climate change, thanks in part to Swedish teen Greta Thunberg who threw the issue into the international spotlight.

Not only do these protests and walkouts benefit the Democratic Party, but they run counter to what conservatives stand for. And even The Washington Post acknowledged that.

“Kids on the right who are active, they tend to be doing it by preparing to run for school board, or being aides in legislature,” Harvard University professor Meira Levinson explained. “I kept looking for examples of students protesting on the right, and it’s very, very hard to find.”

And a liberal student in the Fairfax School District admitted that only kids on the left skip school to protest:

Wendy Gao, a Fairfax student who leads several groups devoted to fighting climate change, said she has never heard of a “conservative-type rally” scheduled during the school week. All of her activist friends, she said, skip school only “for liberal issues like climate change.”

Conservative students don't skip school or work to protest because we value hard work and our commitments. This very policy explains the difference in ideology perfectly.