Ironic Much? Eric Holder Has a Word of Advice For Bill Barr About 'Appearing Neutral' 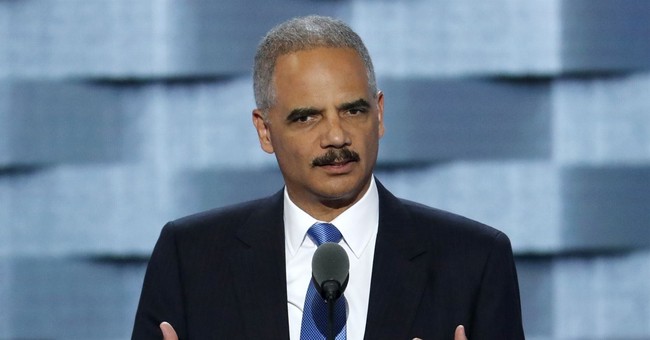 According to Holder, Barr crossed a "political line" by involving President Donald Trump in the Investigation into the origins of the Russia probe.

"I think the whole thing that the Attorney General is involved in is highly unusual, ordering an investigation of our intelligence and law enforcement agencies when there was already an investigation underway by the Inspector General," Holder told a reporter. "I think that’s kind of a threshold matter. And then to see how the President is now involved in trying to help the Attorney General in that effort gives me pause."

What's ironic, however, is Holder believes Barr is the one who is politicizing the Department of Justice.

“I think when people look at the Justice Department and think that it is in some ways politicized, that has a negative long-term impact on the Department," he explained. "FBI agents have to testify in trials all around this country, and to the extent that a person looks at an FBI agent and thinks that that person, that the FBI agent serves in a politicized agency, that can make a person, a juror, for instance, maybe think that this FBI agent is not telling the truth in the way that we traditionally have.”

Holder came under fire for Operation Fast and Furious, where the Department of Justice knowingly allowed "gunwalking" to take place. The DOJ purposely allowed the ATF to approve firearms sales to known straw purchasers as a means of tracking the guns to Mexican drug cartels. Hundreds of guns were sold, lost track of and later used in crimes in Mexico. One was also used to kill Border Patrol agent Brian Terry.

Holder was never neutral, especially not when it came to Fast and Furious. If he was, he would have taken responsibility for what happened, not try to deflect. Before he starts telling others how to act, he might want to look in the mirror and do some self reflecting.