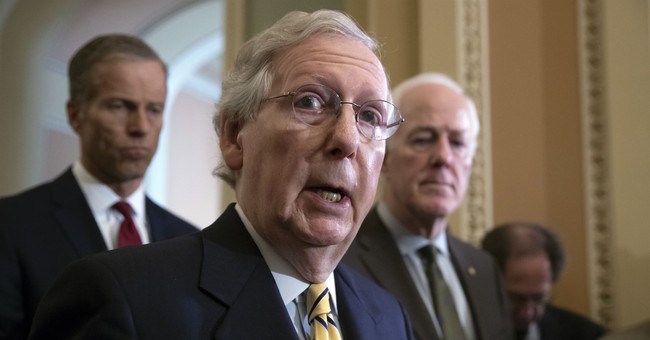 “Partisan Democrats and their media allies were crushed a few months ago when Mueller’s report cleared the president of conspiring with Russia during the 2016 campaign. And now, their frantic hyping of the Special Counsel’s congressional testimony had fallen flat once again. But the conspiracy theories and reckless accusations had to continue. Too many people had invested too much in the hysterical echo chamber to simply wind it down and join the rest of us in the real world.

“The outrage-industrial complex needed a new target. And that’s where I come in. Mitch McConnell, the hawkish foreign policy conservative who’s spent decades pushing back on Russia every way I can think of, was accused of what amounts to treason by multiple media outlets within a couple of hours. These absurd smears weren’t thrown out there by anonymous Twitter accounts or fringe bloggers. Oh, no. This modern-day McCarthyism was pushed by big-time outlets. The smear that I am, quote, a ‘Russian asset’ ran in the opinion pages of The Washington Post. The accusation that I am, quote, ‘un-American’ was broadcast on MSNBC.

“This is the state of left-wing politics in 2019. It’s like an inflationary crisis, but with outrage instead of dollars. These people have worn out the volume knobs so badly that they have nothing left but the most unhinged smears. Welcome to the modern-day McCarthyism. McCarthy-like tactics out in the open, for everyone to see. In Dana Milbank’s column in The Washington Post and on a major cable channel run by NBC.

“It started with the angry lies on MSNBC. The host lied and said that I’ve dismissed Russia’s interference in our 2016 election as, quote, a ‘hoax.’ Of course I’ve never said any such thing. I’ve spoken extensively and often about Russia’s unacceptable interference in 2016. I constantly discuss all we’ve been doing to correct the Obama Administration’s failures to respond more assertively to the Russian threat, including on election security.

“So, let me make this crystal-clear for the hyperventilating hacks who haven’t actually followed this issue: Every single member of the Senate agrees that Russian meddling was real and is real. We all agree that the federal government, state governments, and the private sector all have obligations to take this threat seriously and bolster our defenses. Claims to the contrary – claims that anybody here denies what Russia did on President Obama’s watch – are just lies. Not partisan distortion, not clever spin; just total fabrications.

“Now, at least this show is honest about what it offers. And it isn’t journalism. Immediately after the host finished his angry string of false claims and called me ‘un-American,’another panelist chimed in to applaud the remarks. Here’s what he said – quote -- ‘We are at war. It's time for the Democrats to wake up.’ And ‘we're not going to necessarily play fair.’ I should say not. Let’s remember how deep MSNBC waded into the conspiratorial fever swamp over the past two years.

“They gave airtime to individuals like one guest who has publicly tweeted, among other things, that a former White House advisor was close to being executed for espionage and that Chief Justice Roberts had sent the Marshal of the Supreme Court to the White House to threaten the president. Utter nonsense. They hosted these kinds of conspiratorial voices. Just a few days ago, one former host at the network pointed out, quote, ‘MSNBC built segment after segment, show after show on building anticipation for a big reveal.’ But then, the Mueller Report took some of their most unhinged stories off the table. And then, just last week, the Special Counsel’s in-person testimony disappointed the political left yet again. So the conspiracy theories needed a new target.

“A few hours later cameThe Washington Post column. It was authored by Dana Milbank, a pundit who spent much of the Obama Administration carrying water for its failed foreign policies and excusing President Obama’s weakness on Russia. Here was the headline: ‘Mitch McConnell is a Russian asset.’A shameful smear. And it was based on more lies. Mr. Milbank repeatedly claims that I’ve blocked all efforts to raise our defenses against Russian meddling.

“The truth is that I’ve championed the coordinated work between Congress, the administration, and the states, which are primarily responsible for elections. And the Senate has passed several major provisions on this subject just this year. And I’ve spoken frequently on the floor about the need to keep up the progress and stay vigilant. What’s more, one of the specific pieces of legislation he claims I have blocked is something I literally have never opposed (S. 1454). His online column links directly to the bill, and it is something I’ve never opposed.

“You’d think a columnist leveling these kinds of smears would at least consult a fact-checker before accusing an elected official of ‘aiding and abetting’ Vladimir Putin.  But, alas. It’s not even a competent hit piece. Just sloppy work. Ironically, Mr. Milbank has frequently written pieces lecturing Republicans who he feels have impugned others’ patriotism. In 2013, the same guy wrote a piece insisting that, quote, ‘in America, a political opponent is not the enemy.’ In 2015, he criticized ‘nutters’ for questioning the president’s patriotism and said that ‘such beyond-the-pale-rhetoric’ had to be thrown out ‘to have a civilized debate.’

“So, you get the picture. See, when a liberal politician is being criticized, these left-wing pundits become choirboys calling for civility and decency and high-mindedness. But when it’s time to smear someone on the other side, they are delighted to lead the charge. As recently as 2017 this very columnist wrote, quote, ‘let’s pause to remember: We are all the American people. And we all love our country.’ End quote.

“As all of our colleagues know, I’ve spoken at length about Russia’s attack on American democracy. I worked to ensure Congress sent hundreds of millions of dollars to the states to improve their defenses, and applauded the whole-of-government efforts that the administration continues to carry out with states and localities. Good news may not sell newspapers, boost ratings, or help with Democrat fundraising. But the facts are the facts. And the facts are that this administration has made huge strides on election security since 2016. They made a noticeable impact in securing the 2018 election and are vigilant and proactive as we head into 2020.

“A few weeks ago, every Senator had the opportunity to attend an all-members classified briefing that I helped organize detailing the major work that’s been underway since 2016. I’ve been in a lot of classified briefings. It’s not exactly common for members to break out into spontaneous applause -- let alone bipartisan applause. But that’s exactly what happened. Behind closed doors, Democrats joined Republicans in applauding the progress made since 2016."