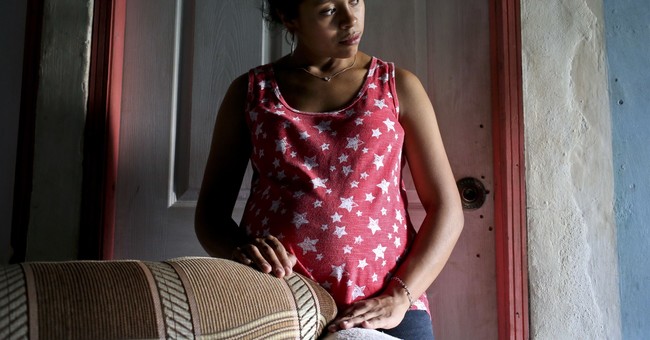 Conservatives have long said one of the major issues with illegal immigration is the number of pregnant women who come to the United States solely so their child can be born on American soil. They know that a child born in the United States automatically makes the child an American and, because of that, the parents are allowed to stay in our country. And all of them are able to reap the benefits of being an American, including access to various welfare programs.

Liberals and the mainstream media typically ignore that fact, no matter how much it is presented to them. NBC News, however, did something shocking: they actually did an "exposé" on that very scenario...and acknowledged what conservatives have said for years.

Because of President Donald Trump's agreement with Mexico, those who file asylum claims must remain in Mexico while their case is decided. It's part of the "Remain in Mexico" plan that was recently established.

“More women are arriving pregnant or with babies,” said pastor Gustavo Banda of the Embajadores de Jesús (Ambassadors of Jesus) church, which operates a shelter in Cañón del Alacrán (Scorpion’s Canyon) on the outskirts of Tijuana. “We have a lot of Haitian women and some Central American.”

And some women even turn up pregnant while waiting to get into the United States.

These pregnant women are here because the Trump administration’s “Remain in Mexico” program requires some U.S.-bound asylum applicants to register at ports of entry and then return to Mexican border cities to wait as their claims are processed.

It’s a period of great anxiety, if only because many want their children born in the United States. The U.S. Constitution guarantees that every child born on American soil automatically becomes a U.S. citizen. Mexico also offers birthright citizenship, but it's not exactly the same: A child born in Mexico, regardless of their parents' nationalities, automatically becomes a Mexican citizen when they turn 18.

It's not exactly known how many pregnant women show up along the border because no official count is being taken by Border Patrol. Shelter volunteers, however, said the number is definitely increasing.

According to NBC's investigation, pregnant women waiting to get into the United States struggle to receive proper medical attention and prenatal care. They rely solely on medical volunteers to provide sonograms, ultrasounds and prenatal vitamins. Their biggest struggle, however, is figuring out where in Mexico to have their baby if their asylum case is still pending.

Recommended
It Was a Prank? Scientist Apologizes, Says the New Star Is Really a Slice of Chorizo
Matt Vespa

To give birth in a Mexican hospital, they must sign up for the Seguro Popular health insurance program — similar to Medicaid in the U.S. But to qualify for an in-hospital birth, they must have obtained an ultrasound, which has been a difficult requirement for most of these women to meet, said Phil Cañete, clinic coordinator for the nonprofit Refugee Health Alliance.

This is one of the reasons President Trump wanted to reform birthright citizenship, because it gives people incentives to flock to the United States.

"How ridiculous, we're the only country in the world where a person comes in, has a baby, and the baby is essentially a citizen of the United States for 85 years with all of those benefits,” Trump previously said. “It's ridiculous. It's ridiculous and it has to end."