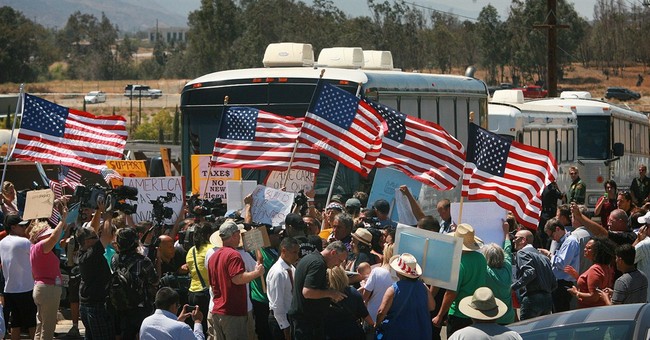 Back in 2014, the Department of Homeland Security took illegal aliens captured in Texas, flew them to California and eventually bussed them to the small yet conservative town of Murrieta, about 70 miles north of San Diego. When residents in Murrieta and the surrounding community received word of what was taking place, patriots gathered outside of the Border Patrol Station to protest the release of illegal aliens into the community. They successfully turned a DHS bus around and kept it from entering the BPS facility.

For over a month, patriots camped out overnight and took shifts watching the station to make sure DHS was unable to dump the aliens at the station when residents least expected it. DHS tried to drop the aliens off three different times before giving up. They eventually canceled their fourth scheduled drop off.

The issue was brought about by Ron Zermeno, a Border Patrol whistleblower and member of National Border Patrol Council Local 1613, who spoke about the issues facing the Murrieta station, despite having a gag order placed against him.

The number one issue agents had with the illegals being dumped at their station: it's not designed for long-term holding. The Murrieta BPS was put in place primarily to catch drug offenders, meaning they're short-term holding facilities. There are no showers. There are no bathrooms. There are no beds. And there is no kitchen. It's a bare basic facility.

I was one of those people who sat out in 100+ degree heat. I saw a community come together to demand that our border patrol agents be treated with dignity and respect. They were being exposed to diseases, like scabies, despite being told the aliens they were dealing with were "pre-screened" for health conditions. Zermeno pointed out that agents weren't trained to identify or deal with infectious diseases but they were forced to deal with the situation as best as they could. Agents were told to wear long sleeves and gloves, as if that was sufficient enough to prevent exposure.

I saw a community stand up to the federal government and say "No, we don't want this," despite living in a state that welcomes illegal aliens with open arms.

I saw a community who felt strongly about protecting young women and children.

The illegal aliens who were dumped in Murrieta were being treated inhumanely, something that pro-open borders people fail to realize. These aliens were being dropped off at a station that was designed to process drug offenders, not house people for long periods of time. They weren't living in sanitary conditions. They were literally in a government-owned building. That's it.

And now, it looks like DHS is trying their hand at it again. Illegal aliens were, once again, flown into California so they could be bussed into the Murrieta community. Instead of dumping them off at the border patrol station in Murrieta, DHS plans to drop them off at various locations, like motels and bus stops, throughout the Inland Empire.

From the Press Enterprise:

The drop-offs have pushed the Catholic Church and immigrant-rights advocates in the Inland Empire into high gear as they coordinate efforts to temporarily house, feed and assist the asylum seekers before sending them off to be with relatives and friends across the country.

In San Bernardino, the recent wave of drop-offs – which came with little warning from federal officials – strained the resources of advocacy groups. In Riverside County, meanwhile, advocates estimate that about 4,000 migrants have been helped by the Catholic Church and others since last October.

“We’ve been hearing that we should expect people every day for the near future,” said Javier Hernandez, director of the Ontario-based Inland Coalition for Immigrant Justice.

“The challenge we have now is how do we respond with the resources we have.”

The reason for the move: asylum seekers from the Central American caravans have overwhelmed border patrol facilities.

The feds are giving money to Catholic Charities to help out the aliens being dumped.

In Riverside County, the Catholic Church and other organizations have been assisting migrants left at bus stops and at churches since last fall, said John Andrews, spokesman for the Diocese of San Bernardino, which serves the Inland Empire. In April, the state gave $521,000 to the Catholic Charities of San Bernardino and Riverside Counties to assist with the asylum seekers.

The Rev. Guy Wilson of Our Lady of Soledad Catholic Church in Coachella described the process as “a crisis.”

“People are just being dropped off at bus stations or, many times, in front of our church, without any resources or orientation for the next step,” Wilson said.

“For months, U.S. Customs and Border Protection has been very clear about the situation on the southern border, which is both a humanitarian and an operational crisis. To manage the unprecedented number of people in our custody, CBP began transporting hundreds of families by bus and aircraft from the U.S. Border Patrol’s severely overcrowded processing facilities to less-crowded stations along the Southwest border. This is the latest contingency we’ve exercised in response to the ongoing humanitarian and border security crisis, which has overwhelmed the entire immigration system.

As of Friday, the U.S. Border Patrol had over 16,000 people in custody, many of whom are in overcrowded facilities. This is the result of a record number of Border Patrol apprehensions – 500,000 so far this year.  We may need to take additional action for the welfare of those in our custody and the health and safety of everyone, including our law enforcement personnel and support staff at our processing facilities.

However, contrary to inaccurate reports in the press, CBP has no plans to transport people in our custody to northern or coastal border facilities, which include Border Patrol stations in Florida.

The men and women of CBP — and Border Patrol agents in particular — are serving on the frontline of this crisis.  They are doing everything they can and we are using every resource available to cope with this worsening emergency. I am asking Congress to act, to help us address this national emergency.”

The Murrieta Police Department, however, said illegals aren't being dropped off.

Either way, residents in Murrieta and the surrounding community are preparing for round two of the border showdown.