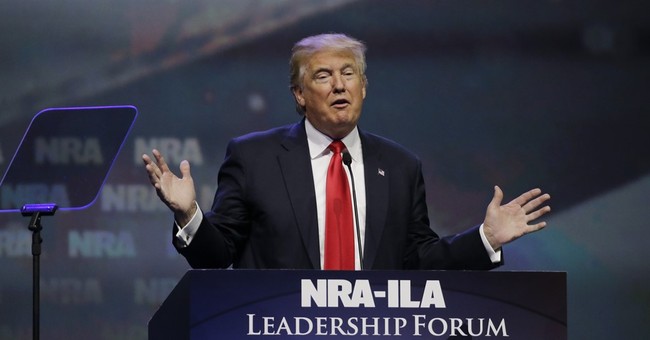 Here's part of their claim:

During the 2016 election cycle, the NRA’s political and lobbying arms spent over $25 million supporting Trump, mostly for television advertising, and distributed and placed those advertisements using the same network of consulting firms that placed the Trump campaign’s own advertisements.

Giffords Law Center and CLC’s October complaint against the NRA and then-U.S. Senate candidate Josh Hawley first unearthed this particular trio of shell companies that used these coordination schemes. In fact, in the final stretch of the 2016 election, the same four strategists at the media consulting firm National Media repeatedly placed ads on behalf of both the NRA and Trump campaign, in some cases on the same stations or programs, to advance a unified strategy. This runs afoul of the FEC’s coordination rules.

Specifically, the groups refer to an "investigative report" put together by The Trace, a subset of Mother Jones:

For the complex and consequential task of placing ads in key markets across the nation in 2016, the NRA turned to a media-strategy firm called Red Eagle Media.

One element of Red Eagle’s work for the NRA involved purchasing a slate of 52 ad slots on WVEC, the ABC affiliate in Norfolk, Virginia, in late October 2016. The ads targeted adults aged 35 to 64, and aired on local news programs and syndicated shows like Jeopardy! and Wheel of Fortune. In paperwork filed with the Federal Communications Commission, Red Eagle described them as “anti-Hillary” and “pro-Trump.”

The Trump campaign pursued a strikingly similar advertising strategy. Shortly after the Red Eagle purchase, as Election Day loomed, it bought 33 ads on the same station, set to air during the same week. The ads, which the campaign purchased through a firm called American Media & Advocacy Group (AMAG), were aimed at precisely the same demographic as the NRA spots, and often ran during the same shows, bombarding Norfolk viewers with complementary messages.

The two purchases may have looked coincidental; Red Eagle and AMAG appear at first glance to be separate firms. But each is closely connected to a major conservative media-consulting firm called National Media Research, Planning and Placement. In fact, the three outfits are so intertwined that both the NRA’s and the Trump campaign’s ad buys were authorized by the same person: National Media’s chief financial officer, Jon Ferrell.

Both CLC and Giffords were quick to point their finger at Trump and the NRA.

“If reports are true that the NRA’s leadership engaged in blatant illegal campaign coordination, this news would not only be an insult to NRA members but a serious threat to the integrity of the presidential election," Peter Ambler, executive director of Giffords said in a statement. “The NRA’s executives owe their members and all Americans answers to the serious questions that have been raised by these ongoing investigations. We’re glad to partner with CLC to demand that the FEC take action on this evidently egregious flouting of our nation’s campaign finance laws.”

“This is some of the most compelling evidence we’ve ever seen of illegal coordination The NRA can legally make unlimited expenditures to support the Trump campaign only if the organizations are completely independent. But if the same people buying ads for the Trump campaign are also placing the NRA’s pro-Trump ads, then the NRA’s spending is not at all independent,” Brendan Fischer, director, federal reform program at CLC said. “The NRA and Trump campaign might claim that their media buyers established firewalls, but it is impossible for an employee to create a firewall in his or her brain.”

Both the CLC and Giffords make this sound like a bigger issue than this probably is. Here's the thing: we don't know exactly what took place, if this even occurred. We don't know if the Trump campaign hired one firm and the NRA hired another. If both "firms" were working under different names but with the same staff, how are both the Trump campaign's staffers and the NRA supposed to know about that? That sounds like it would be on the PR firm for lying and manipulating ad buys. If that's the case, then it's not fair to completely blame Trump's team or the NRA. It would be the fault of consultants. This seems like a hoax to make gun owners and Second Amendment supporters look like crazies.