No Deal: Democrats Have Devised A Way To Dilute Trump’s Judicial Picks 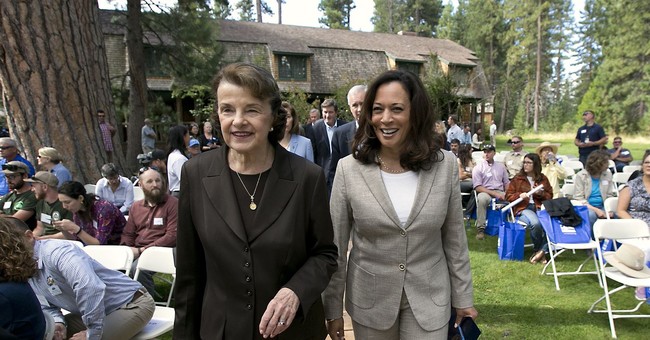 California Sens. Dianne Feinstein (D) and Kamala Harris (D) are utilizing their positions on the powerful Senate Judiciary Committee to try and have a say in who should fill vacancies in the Ninth Circuit Court of Appeals and various district courts.

The two legislators sent a letter to White House Counsel Pat Cipollone to let the Trump administration know that they're ready and willing to come to a compromise nominees.

We write to follow up on our previous letter dated October 19, 2018, whereby we requested that the White House work with us to reach an agreement on a consensus package of nominees for vacancies to the Ninth Circuit and to the district court vacancies in the Central and Southern Districts of California.

We do not know if you have assumed the position of White House Counsel yet, but we are writing to follow up post-election to reaffirm our willingness to engage in such discussions once you are prepared to do so.

In our previous letter, we indicated that we would be prepared to accept the following potential offers for a package to the Ninth Circuit: James Rogan from the White House’s list, Judge Lucy Koh from our list of recommended candidates, and a third candidate to be further agreed upon.

The Ninth Circuit negotiations would also be part of a broader package that would also fill vacancies to our district courts in the Central and Southern Districts of California. Our respective judicial commissions have interviewed numerous candidates to these vacancies – including those suggested by the White House. We believe that we could agree upon some set of nominees that would be agreeable to all parties involved.

While we continue to oppose the slate of nominees the White House put forward on October 10, we remain hopeful that you will work with us to reach a bipartisan agreement in a timely manner.

Thank you for your consideration.

Now that Justice Brett Kavanaugh is on the bench, Democrats have suddenly realized that President Trump has had a significant impact on the judicial system. They've been so focused on just the Supreme Court that they failed to realize – or care – that Trump was filling hundreds of vacancies at the district court level. It's like a light bulb went off in their head and suddenly they want to try to reduce the impact that conservatives will have on the court system. You know why? Because it's likely that district judges will then be considered for a judgeship on a circuit court and, eventually, the Supreme Court.

Hopefully Trump will tell them, "no deal." The Ninth Circuit Court of Appeals has given us some of the most liberally biased rulings. A conservative bent to the court would be a nationwide win.