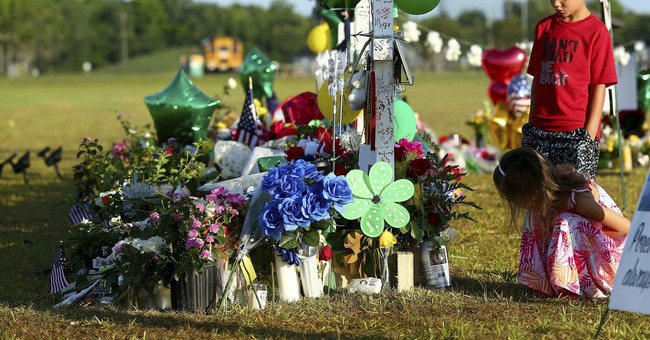 Just before the midterm elections, the Center for Homeland Defense and Security at the Naval Postgraduate School released a new resource they're calling a “K-12 School Shooting Database.” Convenient, right? Here's the thing: the name is definitely misleading. What's considered a "school shooting" means different things to different people. For most people, the term "school shooting" is automatically antiquated to the horrific tragedies that took place in Parkland, Sandy Hook and Columbine.

The database claims that there have been 1,300 school shooting incidents since 1970. When we hear statistics like that, it's no surprise that kids are concerned about the likelihood of a school shooting taking place at their school.

But here's what gun control advocates won't tell you:  We know from other researchers that schools are safer than they were in the 1990s and that there are not more school shootings today than there were in the past.

Northeastern University professor James Alan Fox analyzed data from a variety of sources and found that “on average, mass murders occur between 20 and 30 times per year, and about one of those incidents on average takes place at a school.”

Even gun control advocate Garen Wintemute, a physician that conducts gun violence research at the University of California, Davis told NPR in March that “Schools are just about the safest place in the world for kids to be…Although each one of them is horrific and rivets the entire nation for a period of time, mass shootings at schools are really very uncommon, and they are not increasing in frequency. What's changed is how aware we are of them.”

So why the jaw-dropping 1,300 incidents figure? The K-12 School Shooting database is clearly defined as casting a wide net. According to the Center’s description, the research project “is a widely inclusive K-12 school shooting database that documents each and every instance a gun is brandished, is fired, or a bullet hits school property for any reason, regardless of the number of victims, time, day of the week, or reason (e.g., planned attack, accidental, domestic violence, gang related).”

In other words, if two adults from rival gangs brandish a gun on school grounds at 2 am on a Saturday, it’s counted in this dataset as a school shooting incident. See how they finagle the numbers to push their agenda?

It's important to remember this tidbit: We must also factor in that these data points are all from news reports. We hear about school shootings much more today than we did in 1970 because of the Internet, which connects us to news stories across the country and around the world. That doesn't mean that school shootings have drastically increased. It means we're more aware of these tragedies and have greater access to various news sources that report on said incidents.

This isn't the first time this "strategy" has been utilized to quantify school shootings. The U.S. Department of Education's Civil Rights Data Collection looked at shootings during the 2015-2016 school year and said 241 schools reported at least one incident involving a school shooting. NPR fact-checked their data and – not surprisingly – found that there were 11 school shootings. Talk about a drastic difference, right?

The biggest difference between the K-12 School Shooting Database and other databases is that researchers have provided the data to the public. This lets us cut through the data that inflate these figures and get a better sense of the actual scale of this problem.

Every American, on both sides of the aisle, can agree that school shootings are a problem that must be addressed through effective policy tools. Before we can even look at how to effectively implement to legislation, we need to be accurate in defining the problem. We need to be honest about the scope of the problem and the number of occurrences that actually take place. In an environment where the media sensationalism of these tragedies has created a sense that they are an increasingly common occurrence, it’s important to have a clear picture of the scale of this crucial policy problem.

Breaking Down the Data

If we took the tact of gun control groups and the mainstream media and went with the widely inclusive net, this is what we would see:

But, if we go through the data and remove categories of incidents that are not shootings or are not in any way similar to the public’s image of a school shooting, we get a very different picture. Instead of 1,316 incidents from 1970-2018, we see 687.

The exact number is not important. We all agree that one criminal misuse of a firearm, particularly when children are in harm’s way, is one too many. But, when looking for solutions to this problem, it is crucial to know the actual scope and scale of the problem. This means excluding instances that:

The database is also built on news reports, which are notoriously inaccurate around these events. To take that into account, the database's developers included what they call a “reliability score.” This allowed them to rank the information from 1 to 5, with 1 representing, “Independent Single Author/Moderator Blog, report/list lacking citations, or cited source cannot be located (e.g., newspaper headline title and story does not appear in searches).” Because there is no real reliability for the information points ranked “1,” they are excluded here.

The chart below shows the difference between taking an overly broad definition of a school shooting incident and counting those incidents that involve an actual shooting or threat by anyone inside a school building or on school property during a school day:

Examples of incidents shaded in light blue include:

These incidents shouldn't be disregarded but they should not be included in school shooting data.

How the Firearms Industry is Responding

While anti-gunners are quick to say the gun industry only cares about making a profit, they ignore the efforts being made by industry leaders.

Here are some of the initiatives being made by the gun industry:

• The National Shooting Sports Foundation (NSSF), the firearms industry's trade association, and the National Rifle Association (NRA) have been a proponent of Fix NICS, a bill that would require all 50 states to submit criminal convictions to the FBI’s National Instant Criminal Background Check System (NICS). This would create a wholesome NICS system instead of allowing states to pick-and-choose whether or not they turn over their records.

• The NSSF's other major initiative, in coordination with federal law enforcement, is to keep guns out of the hands of criminals. Don't Lie for the Other Guy is a campaign to prevent straw purchases by educating gun retail store owners.

• The NRA's School Shield Program equips schools with the knowledge to make their campus safer from a potential shooter by helping them develop and manage their security measures. The NRA Foundation also provides grants to school districts who need help funding projects and training.

If we hope to make any kind of dent in this issue, both sides need to be clear about what data is appropriate. We need to agree on what defines a "school shooting" and include data that falls into that category. Anything else would be a gross negligence.