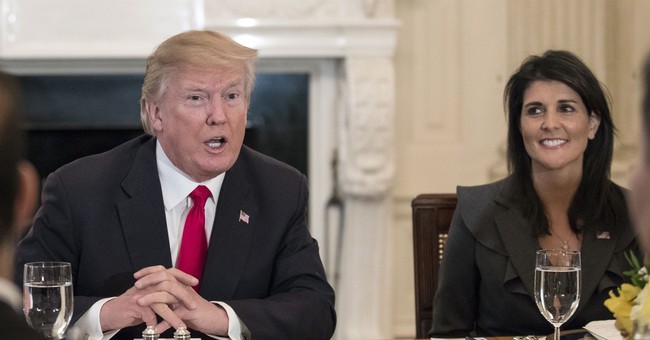 During an interview Thursday at the University of Chicago’s Institute of Politics, U.S. Ambassador to the United Nations Nikki Haley said the uncertainty of President Trump’s tweets keeps things interesting because she doesn’t know on a daily basis what he is going to tweet.

“It makes it interesting that when I wake up, I don’t know what he’s going to tweet,” Haley said during an interview with David Axelrod, ex-senior adviser to former President Barack Obama.

Referring to Trump’s speech at the General Assembly in September, Haley said the president asked her about using the nickname “Little Rocket Man” during his speech, a name he previously used for North Korean leader Kim Jong Un on Twitter.

“He called me about that and I said, ‘OK now, Mr. President, you need to understand, this is a serious crowd,” Haley recalled. “They’re not going to rally. They’re not going to cheer, that’s just not who these people are, so don’t take that the wrong way. Just pretend that it’s a church, you’re speaking in church.

Despite her cautions, Haley said the President wanted to use the nickname in his speech.

“So then he said, ‘Well, I’ve got to ask you, what do you think about me saying ‘Little Rocket Man’ in the speech?’ I said, ‘It’s kind of a formal crowd… It would be different!” Haley said.

Following the President’s speech at the General Assembly, Haley said other heads of state were using the nickname in reference to the North Korean leader.

“After the speech, other heads of state were calling [Kim Jong Un] ‘Little Rocket Man.’ So it works.” Haley said.

“I have an African president that I met with right after [the speech], and he’s not even using Kim’s name. He’s calling him ‘Little Rocket Man,’” she added.

In June 2017, White House Press Secretary Sarah Huckabee Sanders responded to a question about a June 2017 poll done by NPR-PBS-Marist which found that 69 percent of U.S. adults felt Trump’s use of Twitter to be “reckless and distracting.”

But Sanders said she believed his use of the platform to reach voters was a positive.

However, many of the President’s critics would rather the president refrain from using the social media platform as a way to reach his supporters.

Robert A. Strong, Professor of Politics at Washington and Lee University wrote that he believes the president has an “over-reliance” on the social media platform and any message conveyed on the platform by the president is eventually lost in the over-abundance of opinion.

“But the president’s over-reliance on Twitter to speak directly to the American people is a mistake, because there simply aren’t enough interesting things for Trump to say. And, on the rare occasion when he does try to convey something important via Twitter, the impact is so lost in the torrent of trivia, insult, self-congratulation and distracting nonsense he unleashes (with the potential exception of threatening nuclear war).”

However, in an October 2017 interview with Fox Business Network, the president said he doubts he would have won the presidency without the social media platform.

“When somebody says something about me, I am able to go bing, bing, bing and I take care of it. The other way, I would never get the word out,” adding, “I doubt I would be here if it weren’t for social media, to be honest with you.”

Haley said that despite the disapproval of his critics, the president is not going to stop tweeting any time soon.

“This clearly is a president who likes social media, and so for everybody that doesn’t like his tweets, it’s not going to stop. It’s who he is, it’s what he does,” she said.