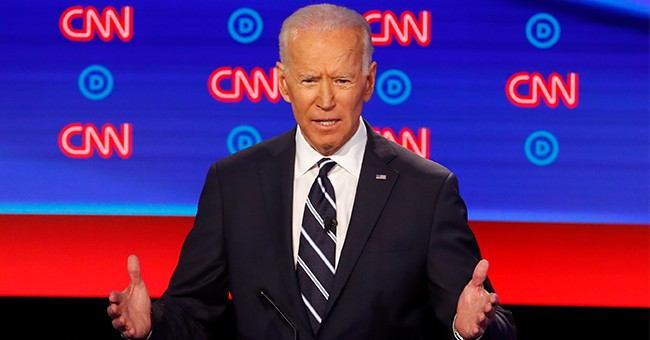 Former Vice President Joe Biden bungled his closing call to action at the CNN Democratic presidential primary debate this week, urging viewers to “go to Joe at 30330 and help me in this fight” when he apparently meant to tell people to text the word “Joe” to that number. Unsurprisingly, his unclear presentation earned some attention.

Visiting the URL joe30330.com launches an amusing website with the headline “Josh for America.” A disclaimer at bottom of the page that says, “Hey! If Joe Biden sent you here, we just want to make something clear: we're not affiliated with any presidential campaign. We're just having some good fun (maybe a little bit at the expense of Joe) :)”

In a video on the site, Josh Fayer announces his exploratory committee and notes that he is the sole person with a “no homework in college position.” Then he counters the naysayers: “Now, some say that this type of policy is unneeded, self-serving and that no one really wants it. But my comprehensive polling has shown irrefutably that college students support my position.”

But just who is Josh Fayer and will he be the next president of the United States? Apparently he’s a college student with a sense of humor. USA Today interviewed Fayer who noted that while the joe30330 domain purchase is new, the Josh for America website actually predates the debate:

In an interview with USA TODAY, Fayer said he and a friend purchased the website domain shortly after Biden's comment and redirected it to Buttigieg's website. They decided fairly quickly "that wouldn't be such a good idea."

"We decided that (my campaign site) would be a better subject than a real political campaign," Fayer said.

The website suggests donating to Pete Buttigieg and provides a link to do so, though Fayer told USA Today “we are not endorsing any political campaign at this time." The following is the message on the donate section of the site:

We're flattered about your interest in donating to our campaign! Unfortunately we're still having trouble resolving a process issue where ActBlue thinks our campaign is "not legitimate." We're sure this issue will be resolved quickly, but in the meantime, please feel free to donate to our good friend Pete Buttigieg's campaign.

Pete's really a guy who knows how to stand up for American values, and, were I not running myself, I'd for sure be voting for him.

Texting “Joe” to 30330 actually does return a campaign message requesting a donation.

Here’s what Biden later said about the issue: