Nikki Haley Lauded for Her Tenure as UN Ambassador 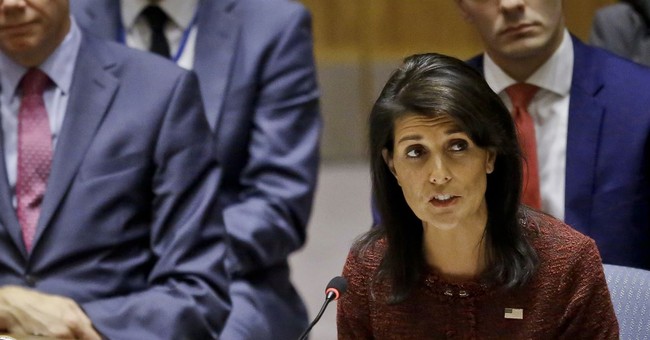 Legislators and others showered U.N. Ambassador Nikki Haley with accolades on Tuesday following the revelation of her resignation. She will depart at the end of the year.

Israeli Prime Minister Benjamin Netanyahu was among those praising Haley’s work as U.N. ambassador—he expressed gratitude for her stalwart support of the Jewish State:

Vice President Pence praised Haley as well, noting in a statement that, “Her frank and clear-eyed assessments of global threats as well as much-needed reforms at the U.N. were in the best tradition of American leadership. We will always be grateful for Ambassador Haley’s courage, intellect, character, and unfailing grace and we wish her and her family every blessing in the years ahead.”

Ivanka Trump also spoke highly of Haley: “Ambassador Haley has served America with dignity + distinction. She is a bold reformer and has been an unwavering champion of truth, principled realism and integrity within the United Nations,” she tweeted.“

Senate Judiciary Chairman Chuck Grassley (R-IA) tweeted: “I’m very sad that Nikki Haley is resigning bc she was such a firm/strong voice for the American ppl at the U.N. she was uncompromising on human rights & religious freedom an area where the US has been weak in the past She will b sorely missed.”

South Carolina Senator Tim Scott (R) tweeted that “Ambassador @NikkiHaley has been a trailblazer ever since she was Governor of our home state of South Carolina. Her seamless transition from the Governor’s Office to the United Nations is a testament to her undaunted love for our country.” In a another tweet he added: “She has been an invaluable asset to the administration strengthening our ties abroad, a strong voice for the voiceless, and a fighter for human rights. Thank you for your service, Ambassador @NikkiHaley.”

“Nikki Haley has set a new standard for what American leadership at the UN should look like,” House Freedom Caucus Chairman Rep. Mark Meadows (R-NC) tweeted. “She stood with our allies and held our adversaries accountable, even when it required standing alone on the world stage. We will miss her, but we are all better off thanks to her service.”