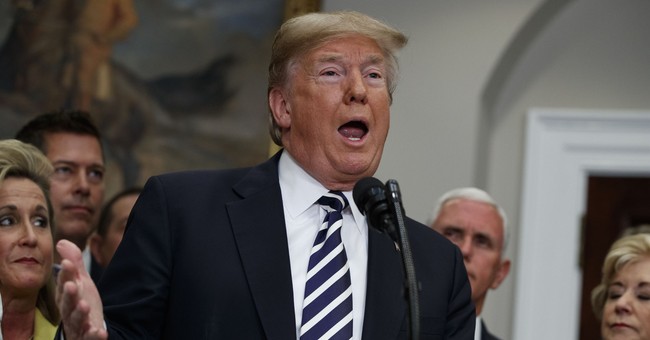 In a letter to the North Korean ruler President Trump said that the June meeting is cancelled but he also expressed his desire to meet with Kim Jong Un at some point in the future and thanked him for freeing the American hostages.

“Sadly, based on the tremendous anger and open hostility displayed in your most recent statement, I feel it is inappropriate, at this time, to have this long-planned meeting. Therefore, please let this letter serve to represent that the Singapore summit, for the good of both parties, but to the detriment of the world, will not take place,” the letter said.

The president also warned the regime of the size and strength of the U.S. nuclear arsenal, stating, “You talk about your nuclear capabilities, but ours are so massive and powerful that I pray to God they will never have to be used.”

Rep. Steny Hoyer (D-MD) released a statement strongly criticizing the president’s letter, calling it “a sad example of the petulance and shallowness of the foreign policy being pursued by this President.”

“It is another demonstration of President Trump’s treating of critical negotiations as if they were just another real estate deal,” Hoyer continued. “From the beginning to the present, the dealings with North Korea have been sophomoric and without strategic or tactical merit. While North Korea’s history has shown them to be untrustworthy and duplicitous, this Administration’s actions have heightened the danger posed by North Korea’s reckless behavior.”

Self-described “Progressive Dem.” and “Member of the #Resistance” Rep. Bonnie Watson Coleman (D-NJ) tweeted that “There are jokes being made about Trump and his failed North Korea summit, including the bizarre letter he signed to cancel it. I wish I could laugh, but the joke this President continues to make of our nation isn't funny. Americans are tired of his shtick.”

Congressman Tim Ryan (D-OH) described the leader of the U.S. as “an erratic President at a time when the United States desperately needs a steady hand.” He said that “It seems the President is finding that empty bluster doesn’t work as well in diplomacy as it does on the campaign trail.”

Sen. Chris Murphy (D-CT) tweeted: “If you’re like me, and worried this sudden, out of nowhere surge of Noeth Korea “diplomacy” was just an effort to check a box before moving to unauthorized military action, today is a really, really bad day.”

Rep. Joaquin Castro (D-TX) accused the administration of a lack of preparedness for the June summit: “The idea that Donald Trump would cancel an historic summit because of someone else’s strong words is absurd,” he tweeted. “With 3 weeks to go, he and his team were not prepared, plain and simple. Saved by the bell.”

Sen. Marco Rubio (R-FL) completely agreed with the president’s move, stating in a tweet that “Withdrawing from talks with #NKorea is 100% the right decision.”

Sen. Tom Cotton (R-AR) also tweetedhis support for the cancellation: “North Korea has a long history of demanding concessions merely to negotiate. While past administrations of both parties have fallen for this ruse, I commend the president for seeing through Kim Jong Un’s fraud.”

Congressman Ron DeSantis (R-FL) tweeted that “If it wasn’t going to be productive, @POTUS is right to nix the North Korea summit. Reagan correctly walked out of Reykjavik rather than give away the store. @POTUS isn’t going to allow Kim Jong-Un to get the best of him.”