House Will Vote On Balanced Budget Amendment To The Constitution 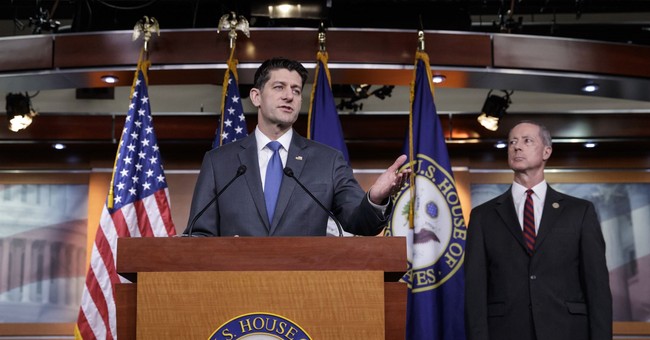 The House of Representatives will vote on a constitutional amendment meant to address Congress’s fiscal irresponsibility, an issue that continually irks conservatives.

However, The Hill stated that the amendment is very unlikely to garner the support required for addition to the Constitution: “The measure has virtually no chance of becoming law as it would need Democratic support in the Senate and ratification from the majority of states.”

In an attempt to combat Congress’s overspending addiction, the balanced budget amendment would require three-fifths of both legislative bodies to approve spending that exceeds government revenue:

“Total outlays for any fiscal year shall not exceed total receipts for that fiscal year, unless three-fifths of the whole number of each House of Congress shall provide by law for a specific excess of outlays over receipts by a roll call vote,” section one of the amendment states.

Section three of the amendment demands the same three-fifths proportion of votes for Congress to inflate the debt limit:

“The limit on the debt of the United States held by the public shall not be increased unless three-fifths of the whole number of each House shall provide by law for such an increase by a rollcall vote,” the text reads.

Congress’s ability to raise more revenue would also be subject to a three-fifths threshold. Section five states that “A bill to increase revenue shall not become law unless three-fifths of the whole number of each House shall provide by law for such an increase by a rollcall vote.”

Section two of the amendment says that, “Total outlays for any fiscal year shall not exceed one-fifth of economic output of the United States, unless two-thirds of each House of Congress shall provide for a specific increase of outlays above this amount.”

Section six of the amendment provides exceptions for over-spending specifically related to war when “a declaration of war is in effect,” and related to “military conflict which causes an imminent and serious military threat to national security and is so declared by a joint resolution, adopted by a majority of the whole number of each House, which becomes law.”

Virginia Rep. Bob Goodlatte (R) issued a press release yesterday in which he urged members of both houses “to do what is morally right and responsible by passing this amendment and sending it on to the states for ratification.”

“A constitutional amendment requiring a balanced budget would finally bring discipline to federal spending and would benefit generations to come,” Goodlatte stated. “I have demonstrated my commitment to fiscal responsibility by introducing constitutional amendments to mandate a balanced budget every congress since 2007. I commend the decision made by House leadership to bring H.J.Res. 2 to the floor for a vote.”

Rep. Justin Amash (R-MI) appeared to agree with Massie’s analysis, because he retweeted it.