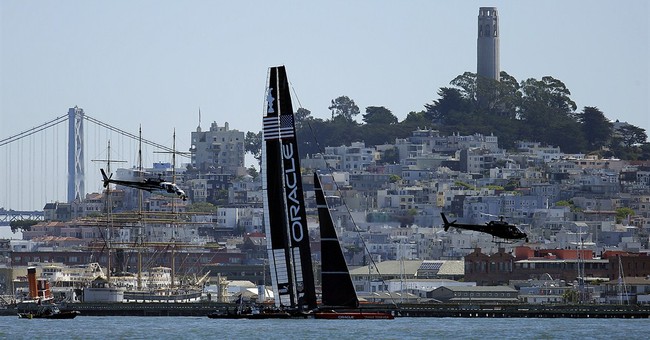 Areas of San Francisco are strewn with filth, including human excrement and drug needles according to NBC Bay Area. A report details the disgusting situation:

“The Investigate Unit spent three days assessing conditions on the streets of downtown San Francisco and discovered trash on each of the 153 blocks surveyed,” the article explains. “While some streets were littered with items as small as a candy wrapper, the vast majority of trash found included large heaps of garbage, food, and discarded junk. The investigation also found 100 drug needles and more than 300 piles of feces throughout downtown.”

There were “41 blocks dotted with needles and 96 blocks sullied with piles of feces.”

Amidst their work, the news outlet encountered a preschool class trekking to city hall: “As the Investigative Unit photographed nearly a dozen hypodermic needles scattered across one block, a group of preschool students happened to walk by on their way to an afternoon field trip to city hall,” the report notes.

The preschool teacher described the wretched conditions she encounters with her class and how she warns the young children not to touch the rubbish they encounter in the city.

“‘We see poop, we see pee, we see needles, and we see trash,’ said teacher Adelita Orellana. ‘Sometimes they ask what is it, and that’s a conversation that’s a little difficult to have with a 2-year old, but we just let them know that those things are full of germs, that they are dangerous, and they should never be touched.’”

Even a three-year-old member of the class vocalized her displeasure about the nasty situation:

“‘The floor is dirty,’ said A’Nylah Reed, a 3-year-old student at the preschool, who irately explained having to navigate dirty conditions on her walks to school. ‘There is poop in there,’ she exclaimed. ‘That makes me angry.’”

Reed’s mother, Kim Davenport, said she protects her daughter from becoming soiled on the way to school. As the article explains, Davenport “often has to pull her daughter out of the way in order to keep her from stepping on needles and human waste. ‘I just had to do that this morning!’” Davenport said.

According to Supervisor Hillary Ronen, the “root cause” of this issue is a lack of “temporary beds” for the homeless. Lamenting that the city is “losing tourists” and “losing conventions” she said that, “All of this is happening because we aren't addressing the root cause, which is we need more temporary beds for street homelessness.”

Ronen also stated, “We're not going to make a huge dent in this problem unless we deal with some underlying major social problems and issues.” She said, “There's a human tragedy happening in San Francisco.”

Cleaning the city’s soiled sidewalks costs tens of millions of dollars. The Public Works Department Director “estimates that half of his street cleaning budget – about $30 million – goes towards cleaning up feces and needles from homeless encampments and sidewalks,” NBC Bay Area said.

The article explains that “The 2016-2017 budget for San Francisco Public Works includes $60.1 million for ‘Street Environmental Services.’ The budget has nearly doubled over the past five years. Originally, that money, was intended to clean streets, not sidewalks.”

Legally, city ordinances dictate that those who own property bear the burden of tending to their sidewalks, but the report says that, “due to the severity of the contamination in San Francisco, Public Works has inherited the problem of washing sidewalks.”