Should College Football Return This Fall? Trump Says Cancellation Would Be 'Tragic Mistake' 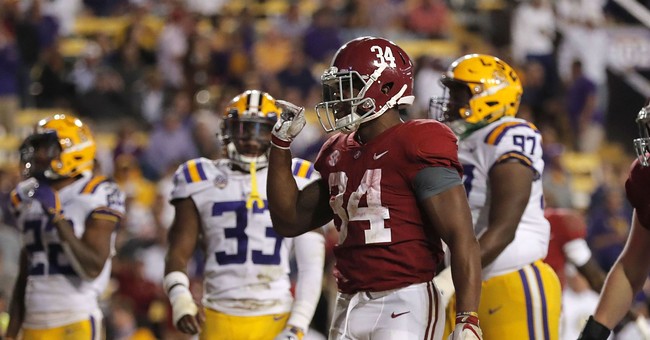 While colleges are mulling whether or not to return this fall, the fate of college football is largely up in the air. President Trump, however, has made it clear he's heavily in support of the sport returning to campuses.

On Monday, Trump tweeted out that "student-athletes have been working too hard for their season to be canceled," along with sharing a conjoint statement posted by Clemson quarterback Trevor Lawrence of various college football divisions under the campaign "#WeWantToPlay."

The student-athletes have been working too hard for their season to be cancelled. #WeWantToPlay https://t.co/lI3CCKZ4ID

Trump also pinned a video in support of Lawrence's movement on Twitter, and he wrote in another tweet "Play College Football!"

Trump phoned in for an interview on Tuesday with Clay Travis on the Fox Sports radio show "Outkick" discuss many issues related to sports returning this fall, including college football.

He called those involved with college football "incredible people" and said it would be a "tragic mistake" if the whole season is canceled for these players.

"These football players are very young strong people and physically they're in extraordinary shape, so they're not going to have a problem," Trump said. "You're not going to see people dying."

The President also added that part of what makes college football so great is the atmosphere, and that "empty seats" does not look good visually, acknowledging this could be another obstacle for the sport.

Even though the South Eastern Conference (SEC), which is arguably made up of the most popular college football teams in the country, has not made any final decisions, eight of the 13 FSC conferences made the choice to cancel. These eight include the Patriot League, the Ivy League, the Colonial Athletic Association, the Mid-Eastern Athletic Conference, the Northeast Conference, Southwestern Atheltic Conference, the Big Sky Conference, and Pioneer Football League. This also led to the decision of the FSC playoffs being canceled.

The debate over college football comes as many schools are reversing course in their plans to reopen, due to the reality they can't keep students safe this fall. Even students who are attending the colleges with in-person instruction in the fall will have to follow strict guidelines including testing at least once a week, a mask at all times, no partying, and social distancing protocols.