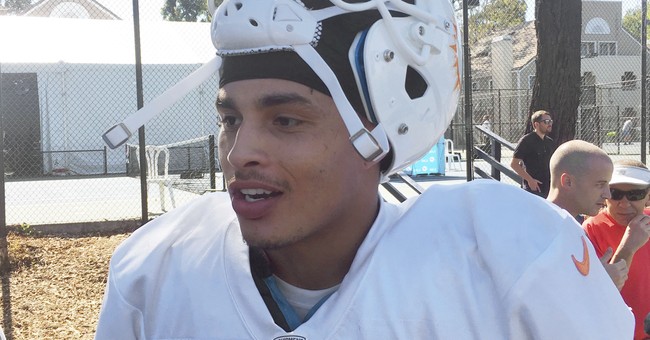 Texans wide receiver Kenny Stills and 86 others are facing felony charges after being arrested at a protest in Louisville on Tuesday.

Stills was involved with a protest that ended up at the home of Kentucky Attorney General Daniel Cameron, calling for justice for the killing of Breonna Taylor, a 26-year-old emergency medical technician who was fatally shot in her home by Louisville Metro Police Department officers.

In March, three officers from the LMPD entered Taylor's residence in plainclothes with a no-knock search warrant. They returned fire after Taylor's boyfriend, a licensed gun owner, said he mistook the officers for intruders and fired on them. Taylor was shot at least eight times and was pronounced dead at the scene.

Jonathan Mattingly and Myles Cosgrove, two of the officers involved, still remain a part of the police force. The other officer, Brett Hankison, has been fired. They have all maintained that they knocked several times and announced that they were police officers before entering the residence. Neighbors have disputed the claim and inconsistent police reports have cast doubt on the officers' recounting of events.

After a unanimous vote, the Louisville Metro Council banned the use of “No-Knock” warrants in June. This followed the passing of Breonna’s Law, a bill that set new guidelines for the execution of all search warrants by LMPD officers, in addition to requiring active body cameras whenever a warrant is served.

Following the Tuesday protest that ended at his home, AG Cameron issued a statement asserting that while his office plans to "fully investigate" the events surrounding Taylor's death, the only outcome that came from the protest was an escalated situation.

"Justice is not achieved by trespassing on private property, and it’s not achieved through escalation," he wrote. "It’s achieved by examining the facts in an impartial and unbiased manner. That is exactly what we are doing and will continue to do in this investigation."

According to the Louisville Courier-Journal, Stills was booked on three charges: intimidating a participant in the legal process, a felony, misdemeanor disorderly conduct, and criminal trespassing. The other 86 prisoners face similar charges, including "Real Housewives of Atlanta" star Porsha Williams.

On early Tuesday afternoon, Stills was taken into custody. His arraignment was at 9 a.m. Wednesday.

In his mug shot, he can be seen wearing a shirt that reads: "BREONNA TAYLORS KILLERS ARE STILL POLICE."

Stills has been released from jail.

Following his release, he posted a photo of himself to his Instagram story, wearing the same shirt he had been arrested in, as well as a mask with the name Breonna Taylor on it. Alongside the photo, he wrote: "#ARRESTTHECOPSWHOKILLEDBREONNATAYLOR."

He also tweeted Wednesday afternoon about the arrest calling his actions "good trouble" and claimed his criminal charges, including felony intimidation, were part of "peacefully protesting."

“Good trouble” with my brothers and sisters- organized by @untilfreedom.

Stills has been a vocal supporter of the Black Lives Matter movement in the past. The wide receiver has kneeled on several occasions during the national anthem and he even has "Black Lives Matter" tattooed on his leg, along with other imagery representing racial inequality.