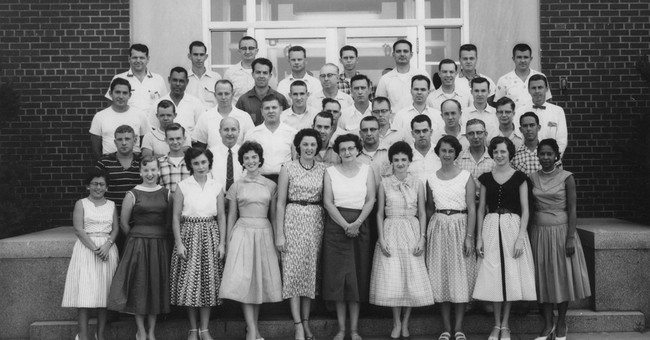 Jackson was NASA's first African American female engineer, working as one of the “human computers” in the segregated West Area Computing Unit at the agency's Langley Research Center.

“Mary never accepted the status quo, she helped break barriers and open opportunities for African Americans and women in the field of engineering and technology,” said NASA Administrator Jim Bridenstine in a statement.

In 2016, Jackson’s trailblazing work and life story were captured in Margot Lee Shetterly’s 2016 novel “Hidden Figures: The Untold True Story of Four African-American Women Who Helped Launch Our Nation Into Space," which was turned into a movie “Hidden Figures” the same year. Award-winning actress Janelle Monáe portrayed Jackson in the film.

Jackson was born and raised in Hampton, Virginia. In 1942 she graduated from Hampton Institute with a dual degree in mathematics and physical sciences. Before her days at NASA, she worked as a math teacher, a bookkeeper, and as a U.S. Army secretary.

She began her engineering career in the 1950s, an era where it was rare to find a female engineer, let alone someone of color. At that time she was believed to be the only black female aeronautical engineer in the field.

For nearly two decades she authored or co-authored around a dozen research reports, mostly centered on the nature of what is known as the boundary layer of air around airplanes.

During her career, Jackson led programs that encouraged the hiring and promotion of women in NASA's science, technology, engineering, and mathematics fields. She retired from the organization in 1985.

In 2019 Sens. Ted Cruz, Ed Markey, John Thune, and Bill Nelson co-sponsored a bill that made its way through Congress, declaring that the portion of E Street SW in front of NASA Headquarters be renamed Hidden Figures Way.

That same year, President Trump signed the Hidden Figures Congressional Gold Medal Act and posthumously awarded Jackson for her work, along with those of her colleagues Katherine Johnson, Dorothy Vaughan, and Christine Darden. Jackson passed away in 2005.

“We are honored that NASA continues to celebrate the legacy of our mother and grandmother Mary W. Jackson,” said her daughter Carolyn Lewis. “She was a scientist, humanitarian, wife, mother, and trailblazer who paved the way for thousands of others to succeed, not only at NASA, but throughout this nation.”

The decision to name the headquarters comes after protests across the United States for more historical black recognition in the form of building names and statues, and the tearing down of figures believed to be associated with racial injustice.

Bridenstine acknowledged NASA’s segregationist past and vowed to be more mindful of racial issues going forward.

“We know there are many other people of color and diverse backgrounds who have contributed to our success, which is why we’re continuing the conversations started about a year ago with the agency’s Unity Campaign,” he said. "NASA is dedicated to advancing diversity, and we will continue to take steps to do so.”