American Humvees Arrive In Ukraine: Poroshenko Thanks U.S. For Support 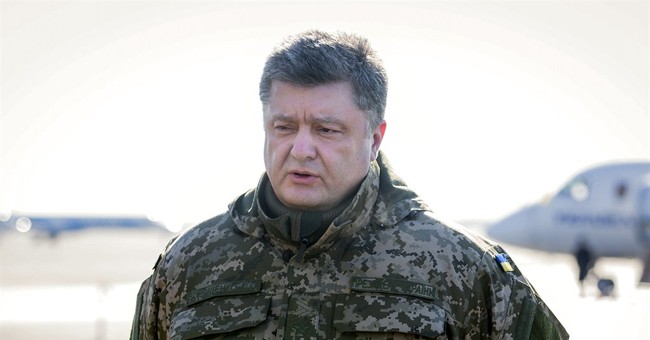 Ten heavily armored American humvees were delivered by the U.S. Air Force to Boryspil International Airport near Kiev, Ukraine Wednesday as part of the United States’ commitment to send defense aid to the nation in its struggle against Russian separatists.

These ten were the first lot that the U.S. will provide to the Ukrainian military: a total of 230 Humvees will arrive in Ukraine in the next 45 days. The U.S. will also send drones, radios, counter-mortar radars, night vision devices and other equipment as part of the $75 million non-lethal aid package.

The vehicles were welcomed at the airport by Ukrainian President Petro Poroshenko, who thanked the U.S. for its support.

“On behalf of the people of Ukraine, I would like to express gratitude to the United States for consistent and firm position on the settlement of the conflict in Donbass,” he said. “For recognizing Russia as a country that carries out aggression against Ukraine.”

The head of state also took to Twitter with thanks:

“Due to constant violations of the ceasefire regime, the enemy makes us intensify the efforts on enhancing our defense capacity,” Poroshenko said during the ceremony at Boryspil. “Still, our resources are restricted. Thus, military-technical assistance from the USA and other countries is timely and increasingly necessary.”

Scattered fighting is still common in the Donbass region, and many are skeptical that a ceasefire would hold, even if fully enforced.

“We don't like the ceasefire at all. As with the previous ones, it'll only lead to another offensive by the enemy,” Militia Commander Andriy Biletsky told Reuters today while preparing for an expected Russian attack in southeastern Ukraine. “Appeasing the aggressor will only lead to more aggression. This war will inevitably continue - either until our complete defeat or until our full victory and return to our land in all east Ukraine and Crimea. We believe in the second scenario.”

The Humvees will be equipped with weapons from the Ukrainian military, and then deployed to assist the nation’s military in defense against Russian-backed forces in the east. During the ceremony, Poroshenko inspected the vehicles and their new accompanying military unit.

"Behind the wheel, I understood that it is an extremely efficient and powerful military vehicle long-awaited by the Ukrainian army,” Poroshenko said.