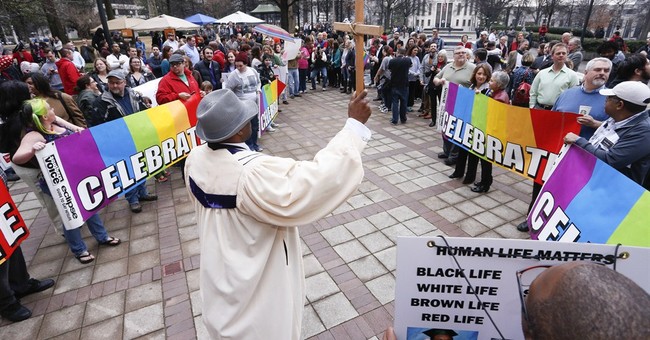 Alabama is joining the realm of the rainbow.

In defiance of a federal ruling not consistent with the Alabama state constitution, Chief Justice Roy Moore of the Alabama Supreme Court issued an order late Sunday instructing judges throughout the state not to issue marriage licenses to same-sex couples.

"The U.S. district courts have no power or authority to redefine marriage," Moore told NBC News. "Once you start redefining marriage, that's the ultimate power. Would it overturn the laws of incest? Bigamy? Polygamy? How far do they go?"

Monday morning, probate judges in many large counties around the state, including Jefferson, Madison and Montgomery Counties, began issuing licenses to gay and lesbian couples despite Moore’s order.

“The court looks the other way as yet another federal district judge casts aside state laws without making any effort to preserve the status quo pending the court’s resolution of a constitutional question it left open in United States v. Windsor,” Thomas wrote. “...This acquiescence may well be seen as a signal of the court’s intended resolution of that question…. I would have shown the people of Alabama the respect they deserve and preserved the status quo while the court resolves this important constitutional question.”

The controversy has been met with a flurry of weddings, and crowds of protesters -- both for and against issuing licenses.

“I don't understand why I shouldn't be allowed to get married. I never thought we'd be able to get married in Alabama. I thought it would be one of the last states,” said Dori Ruboff, a pro-gay marriage protester from Anniston. "And then one bigot named Roy Moore throws one log in the fire and everyone puts their tails between their legs and goes running. I'm proud of our probate judges who are issuing licenses today and I think the judges who aren't should be arrested for breaking the law."

Alabama Governor Robert Bentley acknowledged that the disagreement in judicial orders put probate judges in a controversial position, and promised not to take any action against the judges, “which would only serve to complicate this issue.”

“I am disappointed that a single Federal court judge disregarded the vote of the Alabama people to define marriage as between a man and woman,” Bentley said in a statement.

Across the nation, human rights activists and gay marriage supporters have poured out their support for the judges and the couples involved.

“Proud to see couples lining up to tie the knot as Alabama becomes the 37th state to recognize #MarriageEquality,” Vice President Joe Biden said on Twitter.