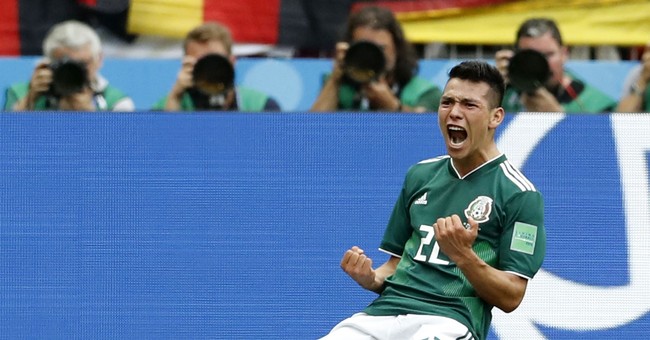 Soccer, a sport played predominantly by socialists and anti-American wimps*, can have some pretty great moments. Today in Mexico City, fans cheered so loudly when the Mexican national team scored a goal against Germany that authorities registered an "earthquake" emanating from the nation's capital.

As noted by the Mirror, "Germany were the strong favourites going into the clash, but it was Mexico who started much the brighter side at the Luzhniki Stadium. PSV winger Hirving Lozano found the back of the net with a spectacular effort ten minutes before the break, sparking wild scenes both inside the packed ground, and back in Mexico."

Germany, the 2014 World Cup Champions, went on to lose to Mexico in a major upset. Lozano's score had such an impact that Mexico City seismic sensors recorded an artificial earthquake.

According to SIMMSA, the group in charge of monitoring and analyzing seismic activity in Mexico, "The earthquake detected in Mexico City originated artificially. Possibly by massive jumps during the goal of the Mexico team in the World Cup. At least two sensors inside the City detected it."

The sports world has seen similar moments in the past. Former Seattle Seahawks legend Marshawn Lynch actually caused two separate earthquakes after scoring touchdowns in the playoffs. According to ESPN, 'Fans jumped and stomped their way to magnitude 1 or 2 earthquake in 2011 during Lynch's rambling, tackle-breaking 'beast quake' run." Lynch then caused similar pandemonium in the 2013 playoffs after scoring a go ahead touchdown. Both quakes occurred against the New Orleans Saints.

As for today's victory, Lozano told reporters that " t's one of the biggest wins in Mexico's history, for sure and it's the best goal I've scored in my life. We all dream of playing in a World Cup and to start in such a positive and important way – I think it's my best goal by far."

* Editor's note: Probably not the best journalistic practice to include such biased opinions in an otherwise straightforward news piece, but somebody had to say it. Soccer stinks.