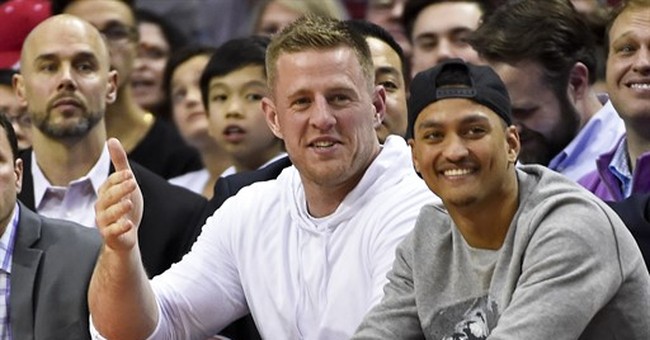 JJ Watt is a larger than life behemoth. As a Houston Texans defensive end, he is known for his fierce love of the game and the fear he often strikes in offensive linemen and opposing NFL quarterbacks.

But off the field, Watt is known as one of the nicest, most caring guys in the league. He proved that again after ESPN reported that Watt will be personally paying for all 10 funerals for the victims of yesterday’s tragic high school shooting in Santa Fe, Texas.

This personal charity is par for the course for Watt. In 2017, after Hurricane Harvey devastated his adopted hometown Houston and much of Texas, the NFL superstar raised more than $37 million for for a variety of charities that helped aid those whose affected by the storm.

That effort, along side Houston Astros second baseman Jose Altuve, earned him the honor of being named 2017 co-Sports Illustrated Sportsperson of the Year.

Watt grew up in Waukesha, Wisconsin and played for Central Michigan before transferring to the University of  Wisconsin. Watt was drafted in 2011 by the Houston Texans. His two brothers, TJ and Derek are also in the NFL.  Watt is known throughout the league fr his often frugal lifestyle.

Below, Watt can be seen chatting with Jimmy Kimmel regarding his thrifty spending habits and larger aspirations in life.

The Houston Texans also released a statement saying, "On behalf of the Texans organization, we are saddened by the tragic events at Santa Fe High School this morning and extend our thoughts and heartfelt condolences to the victim, their families and all those affected. We are grateful for the brave first responders, law enforcement officials and medical personnel. The Texans family will continue to pray for our neighbors.”

Statement from the Houston Texans regarding the tragic events at Santa Fe High School. pic.twitter.com/JM1Gg16CRu