Cameron to Scotland: Independence Would Be Your Economic Ruin 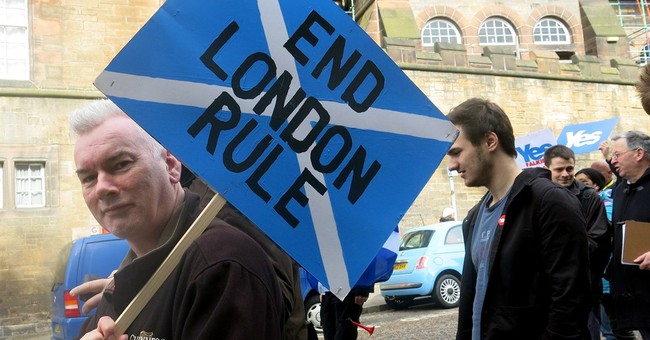 As the people of Scotland prepare to vote on their independence Sept. 18, UK Prime Minister David Cameron has warned that the divide would result in a devastating blow to Scotland's economic viability.

During a speech Thursday to the Confederation of British Industry's (UK's premier business lobbying organization) Cameron urged them to recognize the symbiotic relationship between Scotland and the United Kingdom:

For some industries, the proportion of trade with the rest of the UK is even higher – 90% of Scottish financial services' customers are in England, Wales and Northern Ireland. Then there's the world-famous gaming industry, cutting-edge subsea technology and life-saving biomedicine – all selling far more outside Scotland than inside.

This success doesn't happen by accident. It happens because of the skill of people in Scotland and the opportunities that come from being part of something bigger, a large domestic market, underpinned by a common currency, common taxes, common rules and regulations, with no borders, no transaction costs, no restrictions on the flow of goods, investment or people. Ours really is an economy of opportunity."

When the Scottish National Party came into power in 2011, it pushed an agenda which included recognizing Scotland as a sovereign nation, according to Daniel Gallagher, Economic Counsellor at the British Embassy in Washington D.C. As the Scottish National Party gained a voice in Parliament it pushed through a referendum which would allow the people of Scotland to vote on their country's independence.

"The debate has largely been around Scotland's economic future and what position and independent Scotland would have in the world," Gallagher said during a speech at the British Embassy July 17.

"The government has out a series of fourteen analysis papers which cover aspects such as international security, cultural ties, currency arrangements, government spending, and the fiscal position Scotland would find itself in."

Britain's final assessment of the situation:

"Scotland is better off as part of the UK, now and in the future."

While Britain may analyze, inform and plead as much as it likes, only the Scots hold the ultimate power to alter the future of their country.