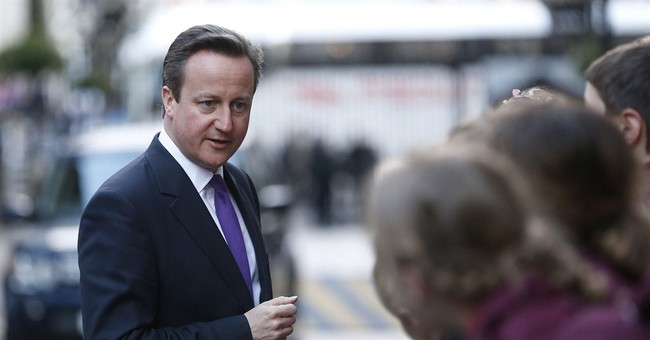 British Prime Minister David Cameron ordered intelligence agencies to probe into the Muslim Brotherhood, fearing the movement may be planning an attack on the Middle East from a base in London. Last week, an Egyptian court condemned 529 members to death. Charges included killing a policeman, stealing weapons, burning a police station, and attacking private property. A long-standing slogan of the Muslim Brotherhood is “Islam is the solution.” They are supporters of ousted Islamist President Mohammed Morsi and have been recognized by many as a terrorist group.

“It’s very important that as a government we are obviously opposed to violent extremism,” Cameron explained during a press conference at Downing Street Tuesday, “We want to encourage people away from a path of extremism, we want to challenge the extremist narrative that some Islamist organisations have put out. What I think is important about the Muslim Brotherhood is that we understand what this organisation is, what it stands for, what its beliefs are in terms of the path of extremism and violent extremism, what its connections are with other groups, what its presence is here in the United Kingdom. Our policies should be informed by a complete picture of that knowledge.”

According to the Guardian:

British officials are saying it is "possible but unlikely" that the Muslim Brotherhood will be banned in Britain on the grounds of terrorist links. Foreign Office officials figures have until now resisted proscribing the organisation on the grounds that that could encourage extremists. "The truth is that this is a large, disparate organisation that takes different forms in different countries," an official told the paper.

The security services are said to take a more hardline view. Sir Richard Dearlove, the former head of MI6, has reportedly described the Muslim Brotherhood as "at heart a terrorist organisation."

President Obama met with leaders of the Muslim Brotherhood at the White House in February in an effort to “include new and emerging political parties and actors.”

Cameron’s Brotherhood investigation, on the other hand, shows his willingness to take a stand on the world stage for peace and democracy.