Is Texas Democratic Rep. Castro Serious With This Defense Of Targeting Of Trump Donors? 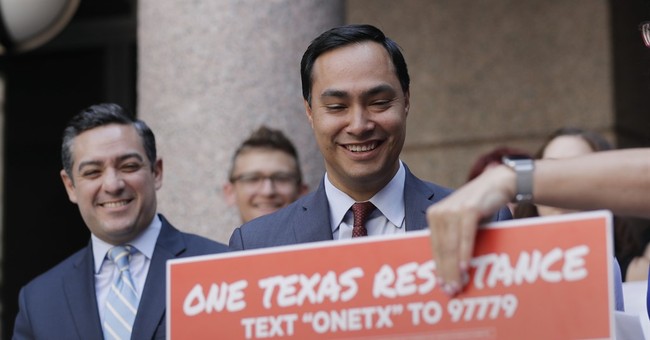 Texas Democratic Congressman Joaquin Castro, brother of 2020 candidate Julian Castro, has targeted Trump donors. He’s revealed their names, the ones who have given the maximum allowed in a year, which has some lobbing allegations of doxxing. If it’s not doxxing, it all but leads the left-wing crazies right to these people in order to be harassed. And yet, these people are the ones who constantly peddle more trust in government because no abuse of power will occur. No one will be harmed…unless you support Trump or have an opinion contrary to liberal orthodoxy (via Daily Caller):

Castro, whose district includes much of San Antonio, claimed the donors “are fueling a campaign of hate that labels Hispanic immigrants as ‘invaders.'” Castro is the twin brother of Democratic presidential candidate Julian Castro and chairs his presidential campaign.

Sad to see so many San Antonians as 2019 maximum donors to Donald Trump,” the congressman wrote, proceeding to name local businesses whose owners gave the maximum to Trump’s campaign. Eleven of the 44 donors shown in Rep. Castro’s post listed their employment as “retired.”

Sad to see so many San Antonians as 2019 maximum donors to Donald Trump — the owner of ?@BillMillerBarBQ?, owner of the ?@HistoricPearl, realtor Phyllis Browning, etc?.

Their contributions are fueling a campaign of hate that labels Hispanic immigrants as ‘invaders.’ pic.twitter.com/YT85IBF19u

The campaign of a member of congress targeting individual donors, and their businesses, to another campaign (and not famous billionaires) is a terrible and dangerous precedent to set.

Not that it would be ok if it were.

Yashar, I respect your work and writing. I’m certain that NY Magazine and Huff Post have printed similar graphics with name and employer many times before because it’s not private and it’s publicly reported. There’s no private addresses, phone numbers, etc. No “call to action.” https://t.co/TxjoTITDbI

They are giving money to a campaign of white supremacy that is demonizing immigrants in ads as “invaders” and inspiring mass murder.

This is public info and we’re doing a service by letting more people know about them.

At the very least @Castro4Congress is inviting harassment of these private citizens. At worst, he’s encouraging violence.

Will media concerned about “rhetoric” care about this?

He’s listing people and their employers.

First, the Indivisble@group’s graphic I shared doesn’t have private or personal info — no addresses or phone #, etc. It’s publicly reported info printed in newspapers routinely from the @nyt to the @dcexaminer. You know that. 1/ https://t.co/t6cdNckM1a

This is bush league. All these people did was exercise their right to free speech and association by supporting the President of the United States. Castro’s defense is that there is no telephone numbers or addresses. It’s all public information. Yeah, but let’s not be stupid, congressman. There are those who have way too much time and money on their hands who will find these people and harass them. You narrowed the search for the unhinged. And yes, it’s your side that’s become crazy, not us.

The Trump campaign’s communications director, Tim Murtaugh, told the Daily Caller News Foundation, “Democrats want to talk about inciting violence? This naming of private citizens and their employers is reckless and irresponsible. He is endangering the safety of people he is supposed to be representing. No one should be targeted for exercising their First Amendment rights or for their political beliefs. He should delete the tweet, apologize, and his brother’s campaign should disavow it.”

Damn the Constitution if it means booting Trump and turning his supporters into targets for the unhinged Left. That’s the Democratic Party in 2020.