The Jacksonville Shooter Was Hospitalized For Mental Illness...How Was He Able To Buy A Firearm? 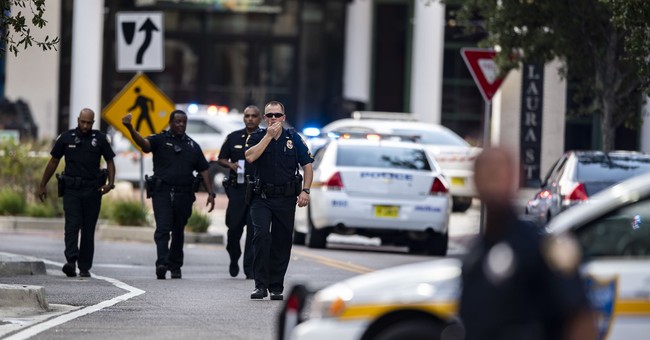 Jacksonville suffered tragedy over the weekend. Two people were killed and at least nine others were injured when David Katz opened fire at a Madden 19 tournament. He reportedly had been beaten in a game before his rampage. Losing a game, and then shooting people. That’s not rational. And if you thought he had mental issues, you would be right (via AP/ABC7 Chicago) [emphasis mine]:

Court records obtained by The Associated Press show that Katz had been hospitalized for mental illness.

Divorce filings from his parents say that as a teenager he was twice hospitalized in psychiatric facilities and that he was prescribed anti-psychotic and anti-depressant medications.

The records show Katz's parents disagreed deeply on how to care for their troubled son. Katz's father claimed his estranged wife was exaggerating symptoms of mental illness as part of the couple's long-running and acrimonious custody battle. They divorced in 2007.

Katz was armed with two handguns (9mm and .45 caliber), which the ATF said were purchased legally (via USA Today):

David Katz carried out his killing spree at the Jacksonville Landing complex Sunday armed with two handguns, both purchased legally in Maryland less than a month ago.

Katz, who killed two fellow gamers before taking his own life, had two guns on his person — a .45 and a 9mm pistol — when he opened fire, leaving 13 victims in his wake.

Police officials said Monday that Katz had extra ammunition with him, but there was no indication Katz had planned the shooting in advance.

Purchasing a firearm at a licensed dealer means Katz would have had to pass an FBI background check that would have reviewed his criminal history.

So, how did he obtain a firearm with this mental health history? Moreover, given this history, was he mentally adjudicated? NRA’s national spokesperson Dana Loesch was asking these questions earlier today.  If Katz was declared mentally unfit, that makes him a prohibited person under federal law—and he did undergo a background check for those the two handguns. Did he have a concealed carry permit? If so, how did he get one with his history of mental illness? This part is a bit regardless because as she and others noted, Maryland and Florida’s don’t have reciprocity for their respective concealed hand gun permits, which means Katz had his firearms in the state illegally. Still, many questions on how someone who was prescribed anti-psychotics was able to legally obtain firearms. We’ll keep you posted.

If the murderer was involuntarily committed and/or adjudicated mentally unfit he is a prohibited possessor: https://t.co/gTvf9QzItT . If this is the case, how, with MD’s strict gun control, did he obtain a handgun? https://t.co/NZZtkzpq1k

Yep, FL doesn’t recognize MD’s permit, so there is no way for the murderer to have legally carried into the state. https://t.co/y2GWuy8gwR

Additionally, ATF says murderer “legally purchased.” So MD gave him qualification license, even after he was twice institutionalized for mental illness and on anti-psychotics? Did they also issue him a hard-to-get CHL? https://t.co/0k2iObnNFj

Katz committed suicide before police could apprehend him.