Media Trainwreck: Yeah, About That Picture Of The Alleged Russian Spy In The Oval Office...It's Not Her 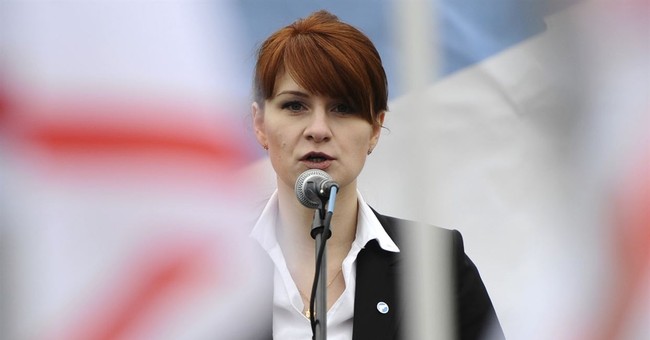 This week, Maria Butina was arrested for being an alleged spy for Russia. If you didn’t know her name, you sure will now given the Russiagate absurdity that’s engulfed the news media (via WaPo):

The Russian woman arrested on charges of being a foreign agent had ties to Russian intelligence operatives and was in contact with them while in the United States, federal prosecutors said Wednesday.

Maria Butina, 29, also had an ongoing relationship with a Republican operative, strictly for business purposes according to prosecutors, and offered another individual “sex in exchange for a position within a special interest organization.”

In a new court filing, prosecutors said Butina, who has connections with wealthy business executives linked to the Putin administration, appeared to have plans to flee the United States.

Butina was arrested on a criminal complaint Sunday, and federal authorities indicted her Tuesday for conspiracy to act as an agent of a foreign government and failing to register as an agent of a foreign government. She is scheduled for a detention hearing Wednesday afternoon on whether to release her from jail before trial, and prosecutors filed a motion this morning outlining why she should be held without bond.

So, of course, collusion fever reached unhealthy levels again yesterday. There was a picture of a woman with red hair—Butina is a redhead—in the Oval Office with President Trump. Great Odin’s raven! But it’s not her. It’s an NSC staffer with red hair. Regardless, the initial tweet went viral (via Mediaite):

Butina even got as close as Susan Rice and Barack Obama, walking arm in arm. Just amazing pic.twitter.com/vXBBzHWrkQ

Watching a photo go viral from journalists who haven’t confirmed the identity of the person in it pic.twitter.com/P90iDxm0MZ

A fmr WH official tells me he thinks the person in this NYT photo is Cari Lutkins, the WH's deputy director of events, who plans logistics for events like these pic.twitter.com/NZJ0z7IUqt

This photo is going around: That is not alleged Russian spy Maria Butina in the Oval Office With Trump. It’s an NSC staffer, a NSC source tells BuzzFeed News. pic.twitter.com/k1pDeIBZiK

Re TASS photo of Trump/Lavrov meeting - woman in the doorway of the Oval is an NSC staffer, NOT Butina.

And that’s exactly what Mic reporter Emily Singer reported on Twitter on Tuesday. Only she was flat wrong.

Only that isn’t so. That’s not her. The Daily Beast‘s Lachlan Markay first heard from the White House that it might be Cari Lutkins, a White House staffer, who was actually pictured.

The photo was still going around, though, and Buzzfeed’s Tom Namako confirmed that it was event planning Lutkins in the Oval Office and not Russian operative and federal detainee Butina.

And liberal media figures wonder why they’re mocked and not trusted anymore.