Trump WH: Actually, We Support Both Immigration Bills That Pretty Much Amnesties A Bunch Of Illegal Aliens 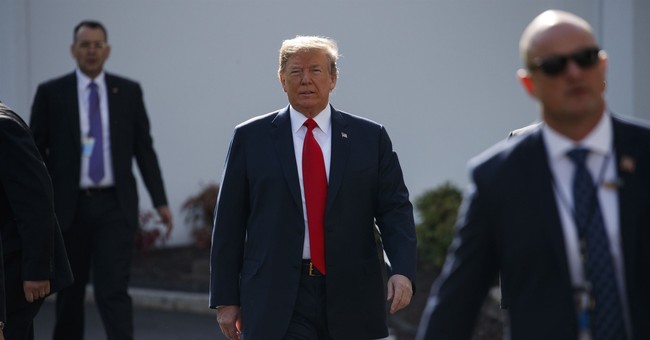 Well, sometimes we all misspeak, and it seems President Trump did so on immigration, much to the chagrin of House conservatives. Earlier today, he said he wouldn’t sign the compromise bill crafted by GOP leadership.

Now, according to this White House staff, Trump reportedly backtracked saying he backs both bills, which is what senior adviser Stephen Miller signaled this week. There was a discharge petition marinating on the Hill, which if successful, would have triggered a series of immigration votes that did not require going through the GOP leadership. Supporters of this push were reportedly a few votes shy of being able to pull this off. So, this compromise was struck and now votes will be held on two bills next week (via The Hill):

President Trump in fact supports both of the House GOP immigration bills expected to receive votes next week and misspoke earlier Friday when he said that he would oppose a compromise measure between centrists and conservatives, a White House official told The Hill.

"Yes, we fully support both the Goodlatte bill and the Leadership bill. The President misunderstood the question this morning on Fox News," the source said in an email. "He was commenting on the discharge petition/dreamers bill — not the new package. He would 100 percent sign either Goodlatte or the other bill."

Centrists had tried to use a discharge petition to force leadership to move on four different immigration proposals, including one backed by Democrats that protects so-called "Dreamers," beneficiaries of the Deferred Action for Childhood Arrivals (DACA) program.

Speaker Paul Ryan (R-Wis.) and the rest of House leadership managed to block that attempt earlier this week, and will instead bring forth a pair of immigration bills, including a more hardline measure from Judiciary Committee Chairman Bob Goodlatte (R-Va.).

So, what’s the difference between the bills? Rep. Bob Goodlatte (R-VA), chair of the House Judiciary Committee, spearheads one, the Securing America’s Future Act. The other is the compromise Border Security and Immigration Reform Act (BSIRA).

In a document drafted by the Federation for American Immigration Reform, both bills provide protections to so-called DREAMers, children who were brought into this country illegally as children but have been afforded protections from deportation thanks to the constitutionally shaky Deferred Action for Childhood Arrivals program initiated by the Obama White House.

Goodlatte’s bill grants three-year legal status (renewable) to current DACA recipients. There is no special carve out for green cards or a pathway to citizenship. BSIRA doles out a six-year renewable legal status to 1.8 million illegal aliens. FAIR adds, “At the beginning of the sixth year, green cards will begin to be awarded to amnesty recipients under a new visa program.”

On the border wall, Goodlatte’s bill authorizes the $25 billion project, but FAIR added the “money would still need to be appropriated.” The compromise bill full funds the wall.

The future of enforcing the law Goodlatte’s bill has mandatory e-verify, while the compromise does not—and it doesn’t cut off funding to sanctuary cities. Goodlatte’s bill ends such funding to cities that defy enforcing federal immigration laws. Kate’s Law is also rolled into the Securing America’s Future Act. Below is FAIR’s breakdown of the two bills:

Kate’s law was named after Kate Steinle, who was killed by Jose Ines Garcia Zarate in San Francisco in 2015 while walking on a pier with her father. Zarate had been deported five times before and picked San Francisco because he knew no one would be looking to deport him. He accidentally shot Kate with a federal agent’s firearm that was stolen. Zarate said he found the gun wrapped in a T-shirt under a bench. He was charged with second-degree murder, but was found not guilty. Her death has spurred a nationwide debate about the function of sanctuary cities.

The compromise bill will also tacklefamily separation during immigration arrests. Needless to say, this bill probably isn’t what hardliners want on immigration. In fact, for every one good aspect, there are two or three that are pretty bad. And we can all thank the moderate wing of the GOP who decided to ally themselves with Democrats for this push. Yes, twenty-three moderate GOP lawmakers hail from districts with sizable Hispanic populations. It still doesn’t negate the fact that this is a vote that we don’t need right now. For this session, immigration died as soon as the Democrats rejected legalizing 1.8 million illegals in exchange for a border wall. It will just divide the party, which is why Democrats are doing this. And yes, the reception to the compromise bill has been rather lackluster (via The Hill):

House GOP leaders sent a 293-page immigration bill to their members on Thursday designed to bridge the substantial divide between the centrist reformers and conservative immigration hawks in their conference.

Early reactions suggest the bill is unlikely to do so, with members of both the far-right Freedom Caucus and conservative Republican Study Committee telling The Hill they planned to vote "no" on the compromise.

The GOP was gaining momentum heading into a critical stage of the 2018 election season, and they risk torpedoing that by giving base voters a reason to stay home. Immigration, jobs, taxes, and gun rights are all on the table this year, the next, and the one after that. It’s in perpetuity. And this bill is nothing but trouble. The time to do immigration is not now.

NEW WH stmt on immigration bills: "The President fully supports both the Goodlatte bill and the House leadership bill. In this morning's interview, he was commenting on the discharge petition in the House, and not the new package"

Editor's Note: We've tweaked the headline to be more accurate. Sorry for the mix up, folks.