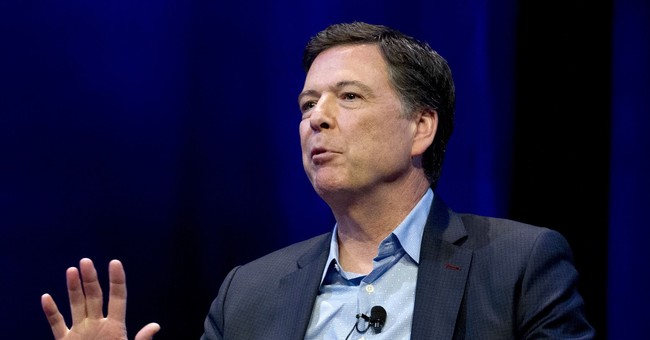 The Department of Justice Inspector General’s report is going to be released today. Former Attorney General Loretta Lynch, former FBI Director James Comey, and ex-deputy director Andrew McCabe will all be given a thorough review for their conduct during the 2016 election. Bloomberg obtained the conclusions of the report and reported earlier this morning that Mr. Comey deviated greatly from department policy regarding the email probe, though there doesn’t appear to be evidence of bias:

Former FBI Director James Comey “deviated” from bureau and Justice Department procedures in handling the probe into Hillary Clinton, damaging the agencies’ image of impartiality even though he wasn’t motivated by politics, the department’s watchdog found in a highly anticipated report.

“While we did not find that these decisions were the result of political bias on Comey’s part, we nevertheless concluded that by departing so clearly and dramatically from FBI and department norms, the decisions negatively impacted the perception of the FBI and the department as fair administrators of justice,” Inspector General Michael Horowitz said in the report’s conclusions, which were obtained by Bloomberg News.

Although the report being sent to Congress on Thursday doesn’t deal with the origins of the probe into Russia meddling in the 2016 U.S. election and possible collusion with those around President Donald Trump, the president and his Republican allies in Congress were primed to seize on it as evidence of poor judgment and anti-Trump bias within the Federal Bureau of Investigation and the Justice Department.

Comey has certainly showed bias after he’s left the FBI upon being fired by President Trump in May of 2017. He admitted that he reopened the Clinton email probe to legitimize a Hillary win because…he thought she would beat Trump anyway. The rule of law predicated upon poll numbers. That’s jarring.

Granted, I’ve always felt that Comey was going to look bad no matter what he did. He comments about the email probe during an election year, he’s in the tank for trump. He decided to release the investigation’s conclusions until after the election and he’s accused of helping Hillary. Now that he’s gone—all bets are off. He says it’s our duty to vote Trump out of office, and that he’s “morally unfit” to be president. He was viewed as a bulwark of the nonpartisan law enforcement agency, and now he comes off as insufferably self-righteous. Maybe he always was, but out of the three, the worst will probably be McCabe, who actually lied to federal investigators, among other things.

More to come this afternoon.